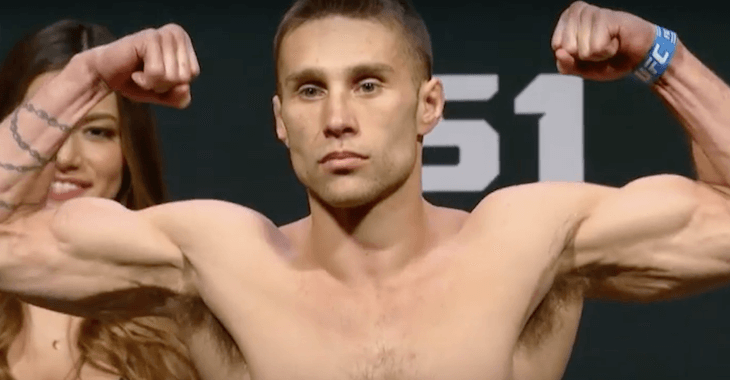 Kyle Bochniak is expected to fight Sean Woodson tomorrow at UFC Boston. The UFC Octagon isn’t the only place Bochniak has had to face great adversity. Recently, he opened up about his struggle with drug addiction that put him in a coma and resulted in a prison sentence. He also revealed the shocking revelation that forced him to turn his life around.

The 32-year old fighter is facing the undefeated Sean Woodson in a featherweight bout at UFC on ESPN 6. He is coming off two decision losses against Zabit Magomedsharipov and Hakeem Dawodu.

Bochniak only joined the UFC two years ago and is a self-confessed MMA addict. Before training in sport, he was channelling his addictive tendencies towards destructive behaviours. During an interview with MMA Junkie, ‘Crash’ said he got in with the wrong crowd which had a negative impact on him, so he began using drink and drugs repeatedly. The late-night parties and constant drug-taking eventually caught up with him. He said:

“I was in and out of rehabs. I fell way behind in school and decided to drop out as a third-year freshman. All my friends were juniors and seniors at the time.

“So I ended up dropping out, not really having anything going for myself. I kind of just coasted that for about four or five years until I turned 22.”

As his addiction spiralled out of control, Bochniak ended up in a coma from a prescription pill overdose. Despite potentially losing his life, it wasn’t enough and the featherweight contender went back to his old ways.

As his behaviour continued to unravel, he ended up in jail. However, it wasn’t the cell walls that gave him the wake-up call. It was the shocking revelation the Kyle Bochniak’s father was in the same prison as him.

The Massachusetts fighter hadn’t seen his dad for years, as he left when he was just a toddler. By a matter of coincidence or destiny, his father was in the prison block next to his.

“Rock bottom was when I found myself in jail,” he said.

“My father was in the next block over, and I never really met him. I was 2 years old when he split. That was the closest I had been to him: in jail. That was rock bottom for me. I was like, ‘The apple really doesn’t fall far from the tree. I need to do something with my life here.’”

After having a dramatic revelation, Kyle Bochniak gave a heartfelt speech during his court hearing. The judge heard his plea and granted five years of probation and a transfer to Hartford, Connecticut. It was during this time that the MMA prospect got a job as a welder and discovered his love for athletics.

“By the grace of God, I got a nice little welding job,” Bochniak said. “I was just trying to stay in shape. I loved athletics. I was always such a good athlete. I stumbled into Broadway Jiu Jitsu, and it basically saved my life – John Clarke and Broadway Jiu Jitsu and mixed martial arts.”

“It keeps me out of trouble. It keeps my head in one place. I know what sessions I have for that day. I plan my whole week out like every single week”

“That’s the type of person I am now, and it keeps me focused. That’s what I like about martial arts and jiu-jitsu. Once you think you start learning, there’s another level. It just keeps my interest, it keeps my attention, and it keeps me hungry. I just keep getting better.”

Kyle Bochniak is now 10 years sober and believes anyone can achieve what they want if they put their mind to it. He said,

“I want to be an inspiration to people and just be optimistic. Just put that right foot forward through that adversity. Just know that you can win no matter what as long as you move forward.”