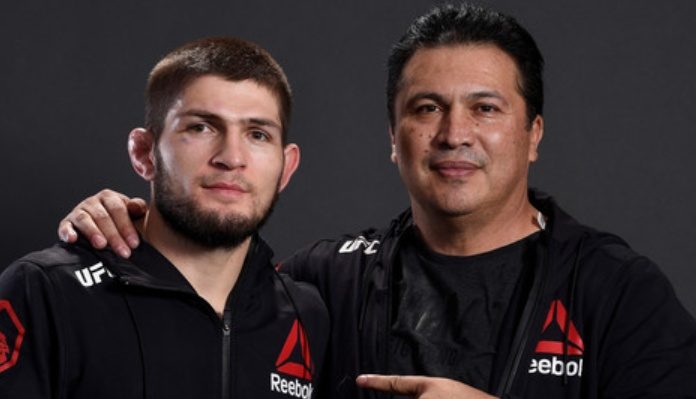 Khabib Nurmagomedov’s coach Javier Mendez has come to the defence of his fighter amidst criticism regarding his UFC 249 withdrawal.

The undefeated lightweight champion was expected to face Tony Ferguson in the main event of UFC 249 on April 18. The UFC stars were scheduled to fight four times in the past, but the matchup was foiled for medical reasons each time. Their fifth matchup was no different as “The Eagle” pulled out a few weeks before their scheduled fight.

In the wake of the coronavirus pandemic, Nurmagomedov returned to his homeland of Russia where he continued training. However, travel restrictions and continual changes dramatically impacted his preparation. He unfortunately withdrew and UFC 249 followed suit, by cancelling the whole event altogether. However, that didn’t stop fans from criticizing the Russian champ. Fans and former opponent Conor McGregor slammed Nurmagomedov and called him a “chicken” for his decision to not fight.

Nurmagomedov’s head coach Javier Mendez shut down that criticism in a Youtube Q & A.

“He did absolutely the right thing when he was told to go to Abu Dhabi because the show more likely was going to be there, and then he would go home from there if that didn’t work out, but that was the plan, and then train at home and then see what happens.”

Khabib Nurmagomedov is a devoted Muslim who has a commitment to Ramadan and will need his usual fight camp before returning to the Octagon. With that in mind, Mendez has given a timeframe for The Eagle’s next UFC appearance.

Nurmagomedov’s head coach has given a best-case scenario, as the future of the UFC remains uncertain in the wake of COVID-19. Hopefully, the sixth time will be the charm for Nurmagomedov and Ferguson, and Mendez wants to make sure his fighter is more prepared than ever.

“He’s gonna need the same amount of time to prepare because we have to respect Tony for the great champion that he is,” Mendez said. “If we don’t give him the same time, if not a little bit more, then shame on me. He’ll get the same attention, if not more, because we’ll probably see him fight one more time before we meet him again.

“If that doesn’t happen I’m okay with it just for fear of it not going through because five times? That’s never happened.”

Do you think Khabib Nurmagomedov vs Tony Ferguson will ever happen? Or do you think it is destined to go down in history as the best matchup that never happened? Let us know in the comments below!