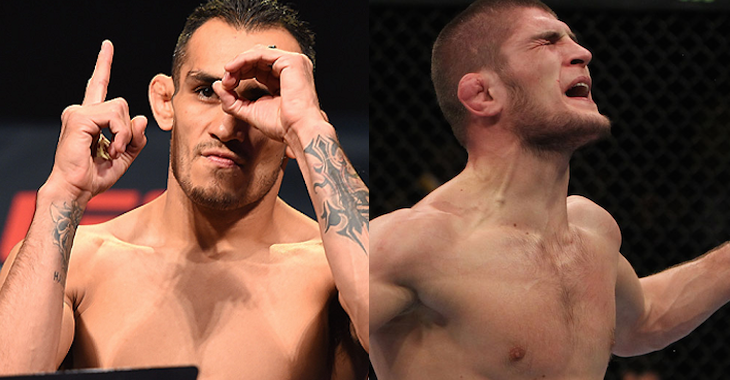 Khabib Nurmagomedov is not making any excuses as he is certain he will beat Tony Ferguson at their upcoming UFC 249 battle. However, he is concerned fans won’t do the same, and will make excuses for “El Cucuy” based on his age.

The eagerly anticipated matchup between Nurmagomedov and Ferguson has been in the works for a long time. The lightweight fighters have been previously scheduled to fight a whopping four times. However, both athletes were forced to withdraw from those previously proposed bouts due to medical reasons. Nurmagomedov believes this will be their fifth and final booking. They are expected to face off in the main event of UFC 249 on April 18th, 2020 at Barclays Center in Brooklyn, New York.

The undefeated champion admits that Ferguson poses the largest threat of his career. However, that doesn’t waver “The Eagle’s” confidence that he will win and successfully retain his belt. He already anticipates that El Cucuy’s fans will use his age to justify a loss:

“No I’m not worried but I understand this is a very big excuse for people,” said Nurmagomedov when asked about Ferguson’s age by Brett Okamoto.

“They are gonna say ‘oh if they fight before, like 4-5 years ago it was interesting,’ but right now, ‘ok Khabib beat him, but he’s like 36-years old.’ This is a very good excuse for haters, for his fans, for him.

“This is what I think, because always when I fight with someone, before fight, everybody talks about ‘now is [a] good challenge’. After fight bam! Everybody say ‘ok we understand Khabib take them down and dominate them.’ Everybody say ‘before we understand, before we know Khabib was gonna beat him.

“But right now, everybody talk about Tony Ferguson can win, Khabib can win. But ok, what they going to say after fight when I make him flat and I smash him? When I beat him? What are they going to say? Ok [they will say] age. This is why I worry.”