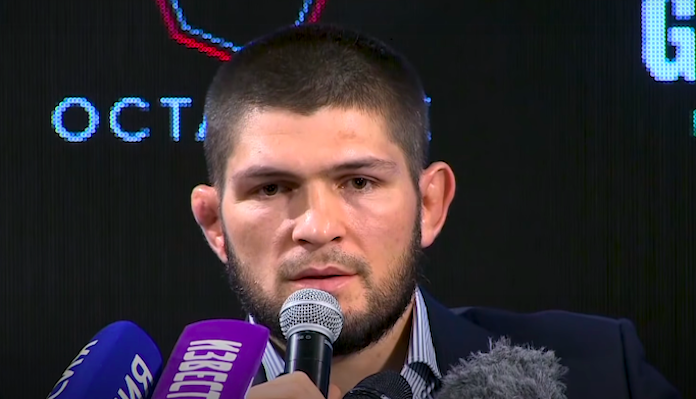 Khabib Nurmagomedov has sent a warning to the UFC.

Eagle Fighting Championship, which is owned by Nurmagomeodv, is set to have its first U.S. event on Friday. The card sees the likes of Rashad Evans, Tyrone Spong, Ray Borg, and other UFC veterans on the event. They have also signed the likes of Diego Sanchez and Kevin Lee which Nurmagomedov says is only the beginning.

According to the former UFC lightweight champion, he says if the UFC does not treat their fighters well, he is glad to have them at Eagle FC.

“I think for big organizations like UFC, Bellator they better be careful with their fighters because Eagle FC is here. Of course, we’re trying to sign good athletes, great athletes with good names,” Nurmagomedov said at a press conference. “At the same time, we’re working with the young generation too. I just want to say be careful, if they don’t treat good fighters, Eagle FC is here.”

Khabib Nurmagomedov is set on making Eagle FC one of the premier MMA organizations in the world. With him being the owner and promoter, it adds to the name value as well as who they have signed and have Chael Sonnen, Kamaru Usman, and Henry Cejudo all working as analysts.

This is also nothing new for Nurmagomedov as before signing Lee, he said he wanted to sign a lot of big-name free agents that left the UFC.

“Anything is possible, we are open to everything. In two days, when we will be holding another press conference, we will be ready to announce the signing of Kevin Lee. We are close to finalizing the deal but nothing is official yet. Why not? These guys have built themselves throughout their careers. They have 10 fights in the UFC, are former champions of the UFC,” Nurmagomedov said at a press conference.

What do you make of Khabib Nurmagomedov’s message to the UFC?