Tony Ferguson has become a source of great inspiration for fans and fighters, alike. Whether it’s his unorthodox fighting style or equally unusual interview quotes,”El Cucuy” uses his unconventional approach to overthrow his opponents. The result is a 12-fight win streak over worthy contenders such as Donald Cerrone, Rafael Dos Anjos and Anthony Pettis. However, the No 1 ranked lightweight contender is yet to feel the wrath of the undefeated lightweight champion, Khabib Nurmagomedov.

For the fifth (and hopefully final) time, Ferguson is expected to face off against Khabib Nurmagomedov for the lightweight belt in April 2020. Their previous bouts were cancelled due to health complications and subsequent withdrawal from both parties. Hopefully, the multiple training camps and long-awaited rivalry will only enhance the most anticipated matchup in UFC history.

In a interview recently, Khabib’s father Abdulmanap Nurmagomedov admitted that Tony Ferguson’s skillset should not be underestimated.

“He’s been caught, but he finishes all his fights with submissions, cuts or technical knockouts. He has a good arsenal, he is a worthy opponent and we are preparing accordingly.” 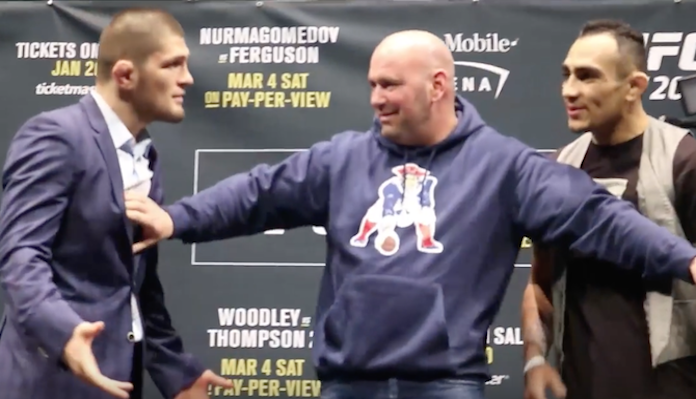 Now, Khabib Nurmagomedov opens up about his respect for Ferguson’s fighting, but he admits he doesn’t like him. He said so during an interview with RT.com:

“The Eagle’s” statement leaves many confused as to where their personal issues begin and end. But one thing is for certain, it’s down to business when Khabib Nurmagomedov enters the UFC Octagon. Do you think Ferguson has what it takes to put an end to Nurmagomedov’s perfect 28-0 record? Sound off in the comments below at Penn Nation.