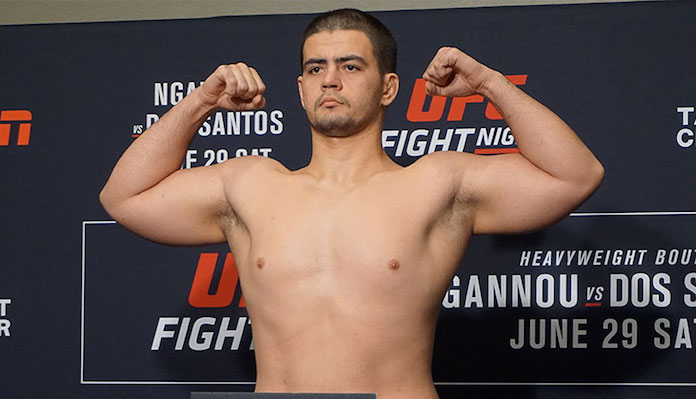 The UFC continues to trim its roster with the subtraction of four more fighters including Brazilian heavyweight Junior Albini.

Check out the latest four roster cuts by the UFC (h/t MMAjunkie.com).

Albini started off his UFC career with a nice knockout win over fellow heavyweight Tim Johnson but then lost four straight fights to Andrei Arlovski, Aleksei Oleinik, Jairzinho Rozenstruik, and Maurice Greene before being released by the UFC. He is perhaps most remembered for his nickname “Big Baby” and wearing his Reebok fight kit in the shape of a diaper in the Arlovski fight.

Coy has only fought three times in the UFC and has only won once, back in 2016 when he submitted Jonavin Webb. He also lost to Danny Roberts and Zak Cummings and has not stepped foot inside the Octagon since 2017. It’s amazing the veteran welterweight hung around the UFC roster this long when you think about it.

Son fought twice in the UFC and had a rough go at it as he lost both of his fights inside the Octagon, but keep in mind those losses came against Petr Yan and Mario Bautista, two very solid bantamweights. That’s a tough run for anyone and the UFC perhaps should have considered giving him one more fight.

Faria lost all three of her fights inside the Octagon with defeats against Jessica Eye, Mara Romero Borella, and Joanne Calderwood in the women’s flyweight division.

What do you think about the latest round of roster cuts by the UFC including the release of Junior Albini?