According to Bellator commentator Josh Thomson, the next walk Nate Diaz makes to the Octagon will be his last.

“I want you guys all to know this. He [Nate Diaz] is leaving the UFC.” Thomson said on his ‘Weighing In’ podcast with John McCarthy. “He’s fighting Jake Paul. They’re going to fight. That fight’s gonna happen.”

Josh Thomson is the only man to ever knockout Nate Diaz. ‘The Punk’ stopped the ‘Stockton Slugger’ with a head kick and punches back in April of 2013. 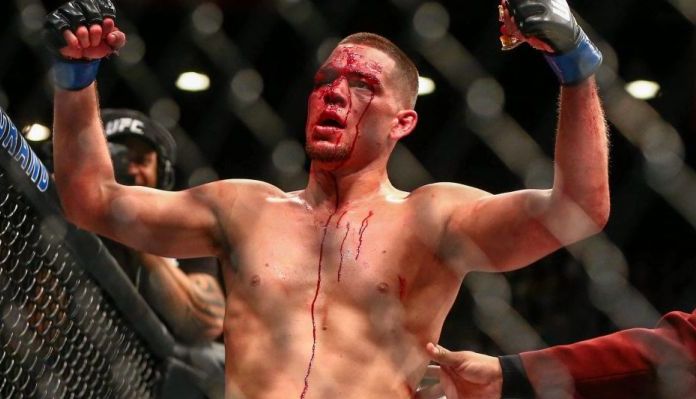 Diaz, a former UFC lightweight title challenger, has spent his last five fights competing inside of the UFC’s stacked welterweight division. During that stretch the Californian has gone 2-3, scoring wins over Conor McGregor and Anthony Pettis.

UFC President Dana White recently attempted to lure Nate Diaz into signing a new contract during a interview with TSN.

“That’s up to him,” White said when asked if Nate’s future would be in the UFC. “I mean that is a decision he needs to make. Listen, for a lot of these guys… There’s no secret about it. If you believe that you are one of the best in the world and if you believe that you can win a world title here, or hang with the top five. Then this is where you should be. The minute you start doubting that is the case, you’ve got to start looking at other options.”

Do you think Nate Diaz will be leaving the UFC after his next fight as suggested by Josh Thomson? Share your thoughts in the comment section PENN Nation!