Jose Aldo vs. Merab Dvalishvili in the works for UFC 278 on August 20th

UFC bantamweight title contenders Jose Aldo and Merab Dvalishvili could have a date in the near future.

The UFC’s 135-pound division is a weight class stacked with contenders. The champion Aljamain Sterling is fresh off a victory over Petr Yan in April at UFC 273. Following the victory, ‘Funk Master’ was rumored for a matchup with either T.J. Dillashaw or Jose Aldo.

As more time has passed, no fight has been confirmed for Sterling. However, it’s very likely that he will be meeting Dillashaw, rather than the Brazilian. MMA journalist Ariel Helwani reported earlier today that the UFC is working on a fight for Jose Aldo.

The Brazilian won’t face Aljamain Sterling next, and instead, will face his teammate. According to Helwani, the UFC is working on a fight between Jose Aldo and Merab Dvalishvili for August 20th. That card is UFC 278, set for the Vivint Arena in Salt Lake City, Utah.

The bout between Jose Aldo and Merab Dvalishvili is a title eliminator bout to be sure. Since his defeat to Petr Yan at UFC 253 in July 2020, the Brazilian has been unbeaten in the octagon. Aldo has captured recent victories over names such as Rob Font, Pedro Munhoz, and Marlon Vera.

On the other hand, Merab Dvalishvili comes in sporting a similarly great win streak. The 31-year-old has won his last seven bouts inside the octagon. During that stretch, he’s captured victories over names such as Marlon Moraes, Cody Stamann, and John Dodson. 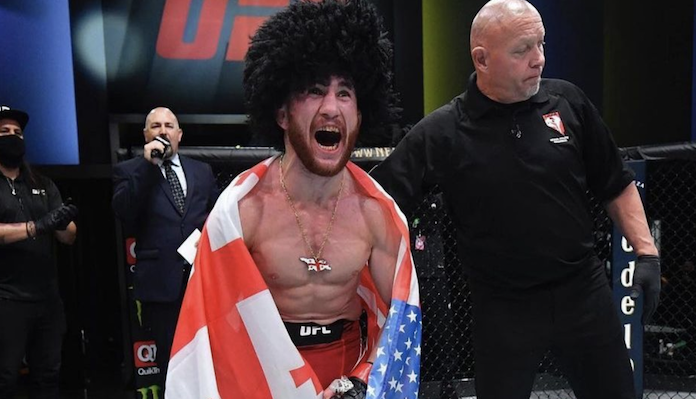 Presently, UFC 278 only has a few fights set for the card as of now. The event is expected to be headlined by the rematch between UFC welterweight champion Kamaru Usman and Leon Edwards.

What do you think about Jose Aldo taking on Merab Dvalishvili? Who are you picking in that bantamweight scrap? Sound off in the comments below!

This article appeared first on BJPENN.COM
Previous articleBrendan Schaub opines that Taila Santos deserved the win against Valentina Shevchenko: “Santos won that fight”
Next articleChael Sonnen reacts to rumors that Conor McGregor will not return until 2023: “That’s the best thing for the industry”
© Newspaper WordPress Theme by TagDiv