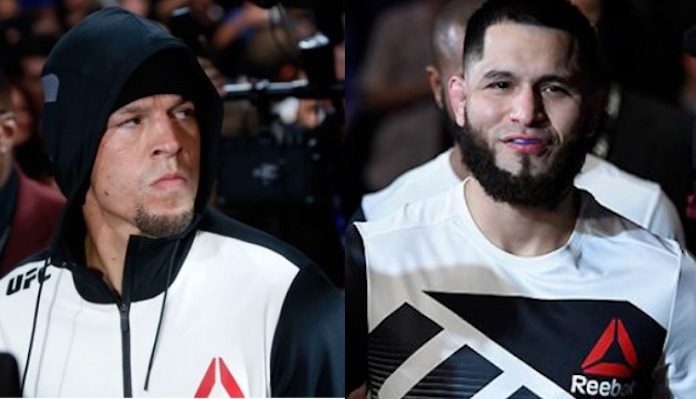 Jorge Masvidal and Nate Diaz were supposed to square off for the promotions new BMF Title in the main event of UFC 244 next month in New York.

However, earlier this afternoon ‘The Stockton Slugger’ took to Twitter where he announced that he had been flagged by USADA and thus would not be competing on the November 2 fight card at Madison Square Garden.

“I’m not gonna make it out to NYC for fight week next week because they say I tested with elevated levels that they say might be from some tainted supplements.” Nate Diaz explained his decision to pull out of the fight with Jorge Masvidal. “I call false on that cause I only take Whole Food or natural food supplements. I don’t even eat meat!”

“So until UFC, USADA or whoever is FUCKING with me fixes it, I won’t be competing. I’m not gonna play their game and try and hit it or keep quiet, as they suggested. I’m not going to have my name tainted as a cheater like these other motherfuckers who keep quiet until after the fight so they can get paid. Fuck*n cheaters. I don’t give a f*ck about some money over my dignity and my legacy.” Nate Diaz stated. “I’m not staying quiet and figuring it out after the fight. That’s cheating. So fight game, I’ll see you when I see you. The realest baddest mother f*cker in the game.”

Shortly after Diaz made his announcement on social media, Jorge Masvidal responded with the following message.

You not the baddest mofo in the game (i am) but you are one of the cleanest mofo’s @NateDiaz209 I’ll see you nov 2. I know your name is clean. I don’t need @usantidoping to tell me shit!

“You not the baddest mofo in the game (i am) but you are one of the cleanest mofo’s @NateDiaz209 I’ll see you nov 2. I know your name is clean. I don’t need @usantidoping to tell me shit!”

‘Gamebred’ was not the only professional to react to the news. Check out how other fighters reacted to Nate Diaz pulling out of UFC 244 below:

I’ll fight in Nov and Dec. that’s what a BMF does now come see me!! #THECHAMP #MSG @danawhite @danawhite @AliAbdelaziz00

What was your reaction to the news that Nate Diaz will no longer be fighting Jorge Masvidal at UFC 244? Sound off in the comments section PENN Nation!