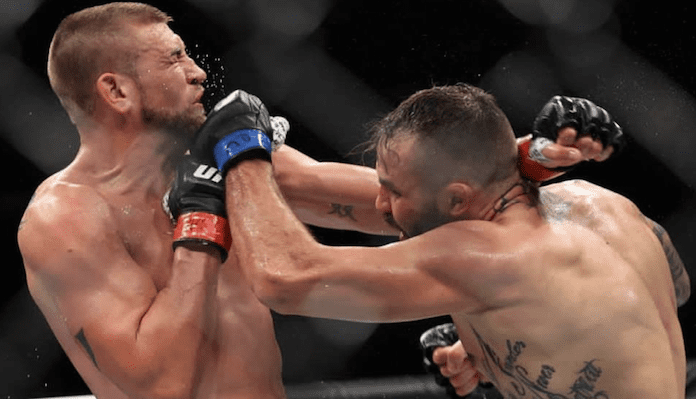 Former UFC light heavyweight fighter John Allan announced himself that the UFC released him following his loss to Dustin Jacoby at UFC 268.

Allan lost a unanimous decision to Jacoby on the UFC 268 undercard. Although he was able to win the third round of the fight on two of the judges’ scorecards, it was too little, too late as he lost the first two rounds and therefore dropped the decision. The loss to Jacoby dropped Allen’s overall UFC record to 0-2, 1 NC. He previously had lost a decision to Roman Dolidze and had a decision win over Mike Rodriguez overturned to a No Contest. As well, Allan lost via submission to Vinicius Moreira when he appeared on Contender Series Brazil.

Following his most recent defeat to Jacoby, Allan took to his social media to confirm that he has been cut by the UFC. Although Allan expressed regret for the way his UFC career ultimately played out, he says that he already has plans as to what could be next for him.

A post shared by John "THE HUNTER" Allan (@johnallanufc)

John Allan: Save team! I communicate to everyone that I am no longer part of the UFC. There were 3 fights in the event although they were good fights, it wasn’t even close to what I am, or what I can show, I went through a lot of problems in the last 3 years, I was out of action for a long time and I couldn’t hit a sequence of fights, and that certainly contributed to this moment. I’m sad, but I don’t see this as a goodbye, but a good-bye. And now? Now I’m going to live MMA outside the UFC, keep working hard, looking to evolve, and being who I really am. I already have new plans, and soon we will have news. Follow the plan.

What do you think is next for John Allan after being released by the UFC?