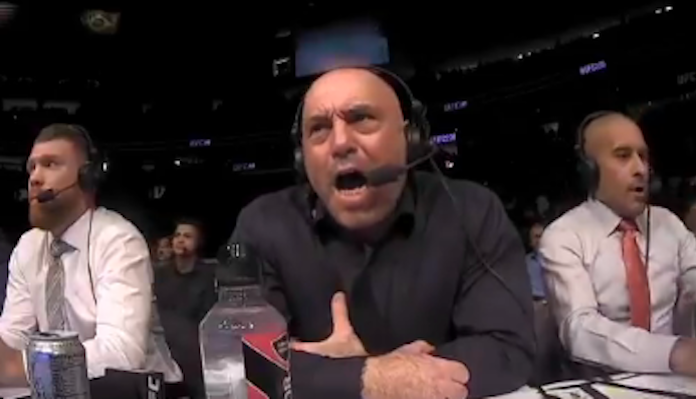 UFC commentator Joe Rogan was not on duty for last Saturday’s UFC Vegas 19 card, but he was seemingly tuned in for the event.

UFC Vegas 19 was headlined by a heavyweight showdown between two top-5 contenders, as Curtis Blaydes took on Derrick Lewis. While Lewis entered the cage as a significant underdog, he ended up winning the fight via brutal one-punch knockout, cementing himself as one of the division’s top contenders.

Thanks to his significantly reduced commentary schedule, Rogan wasn’t on duty for this card, but it looks as though he was watching.

Speaking on Instagram after the card concluded, he sent a message congratulation Lewis for his victory.

“Congrats to the great and powerful @thebeastufc on tying the all time KO list and being the heavyweight with the most knockouts ever,” Rogan wrote. “If you haven’t seen his ferocious victory last night, it’s not for the faint of heart.”

Joe Rogan has been working for the UFC since 1997. Initially, he served as a backstage interviewer for the promotion, but quickly moved into a color commentary role. He has worked for the promotion ever since, and has become one of its most famous personalities.

While Rogan is a staple of big UFC cards, however, he has reduced his commitment to the promotion domestic pay-per-views, which means that cards like UFC Vegas 19 are handled by other commentators such as Daniel Cormier, Michael Bisping and Paul Felder.

With his victory over Curtis Blaydes, Derrick Lewis is now on a four-fight win-streak. Prior to beating Blaydes, he was riding wins over Alexey Oleynik, Ilir Latifi, and Blagoy Ivanov. He’s now sitting at No. 2 in the official UFC rankings.