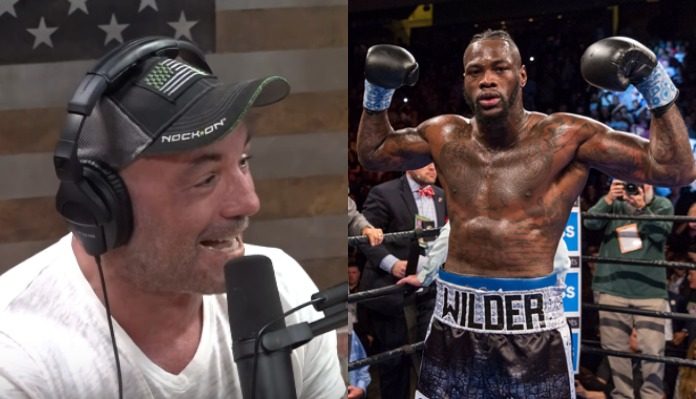 It’s no secret that Joe Rogan is pretty high on WBC heavyweight champion Deontay Wilder. The UFC commentator and podcaster frequently gushes over the brick-fisted boxer, and has even had him on a guest on his show in the past.

On the latest edition of the Joe Rogan Experience MMA Show, which featured boxer Terence Crawford as a guest, Rogan once again sang the praises of Wilder.

He referred to the champ as an “anomaly” for the way he generates so much power despite being so small for a heavyweight, and for the unbelievable success he’s had despite the brevity of his time in the sport.

“The crazy thing is, when he fought Tyson Fury, he was 209 [pounds]. And he punches so fucking hard, it’s crazy. That dude is an anomaly. The fact that he won a bronze medal in the Olympics three years after taking up boxing… It’s insane. It’s just insane.”

After a quick anecdote from Crawford, who discussed the way Wilder entered the boxing scene as if from nowhere, Joe Rogan continued.

“He’s a unicorn,” the UFC commentator said. “When you look at his record, what is it? 39 knockouts out of 41 fights? Isn’t it something like that?

Wilder is expected to fight Luis Ortiz in his next fight. Provided that fight goes as planned, he’s then expected to rematch Tyson Fury — one of the two men to survive to a decision with him — in 2020.