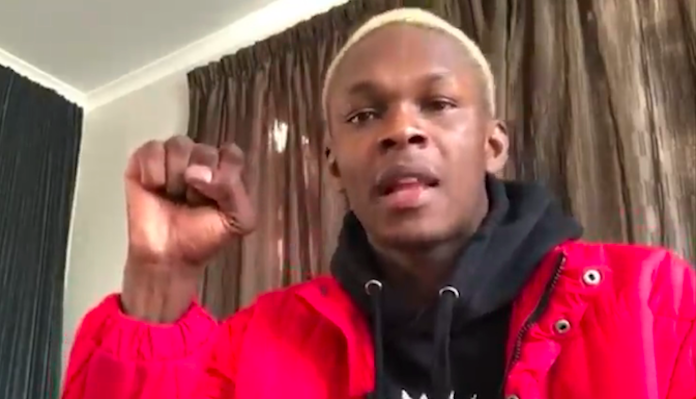 UFC middleweight champion Israel Adesanya has addressed the recent video released by his soon to be opponent Paulo Costa.

Earlier this week the undefeated Brazilian took to social media where he shared a video of him beating up a ‘Stylebender’ impersonator.

For Adesanya (19-0 MMA), the video only assists in proving his theory that he is already inside the head of ‘The Eraser‘ ahead of UFC 253.

“It doesn’t really bother me,” Adesanya said on Thursday during a virtual media day in support of the middleweight title fight (via MMAFighting). “He can make any kind of tapes that he wants to make. I’m just going to keep doing me, like I always have.”

There has been no shortage of trash talk between Israel Adesanya and Paulo Costa prior to their highly anticipated collision on September 26.

The Brazilian in Costa has gone as far to say that he plans on “killing” Adesanya when they finally meet in the Octagon.

The war of words has not interfered with the champions preparation for the fight, in fact, he claims it is all part of his plan to erase Costa.

“I’m just enjoying poking the bear as he wallows away in his own f*cking piece of sh*t,” Adesanya said. “Let him do him, and I’m going to keep doing me. I’m not bothered.”

While ‘Stylebender’ is willing to acknowledge that Paulo Costa is dangerous, he claims that the Brazilian is not even close to the best striker he has faced.

“Yeah, he’s not the best striker I’ve fought, but he’s dangerous, though. That’s one thing you have to remember. But he has to remember, so am I.”

Who are you picking to win this month’s UFC 253 pay-per-view headliner between undefeated middleweights Paulo Costa and Israel Adesanya? Share your predictions in the comments section PENN Nation!