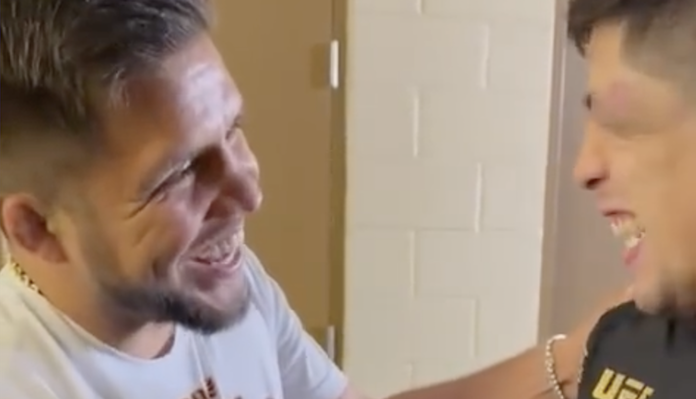 Moreno finished Figueiredo in the third round with a rear-naked choke to become the new UFC flyweight champion. Following the event, Moreno ran into Cejudo backstage and the former UFC flyweight champ congratulated Moreno on his victory. The two were former training partners and Moreno even helped Cejudo prepare for his fights with Demetrious Johnson and Jussier Formiga. Cejudo was nothing but happy for his longtime friend.

It’s crazy to say that we use to be main training partners for each other back in the day. I’ve always known this man was special and I’m not surprise he has the belt a round his waist. Congratulations @theassassinbaby for becoming Mexico’s first UFC Champion. Ps you know what my favorite color is Brenda keep your hands up

Henry Cejudo also comes from a Mexican background, but since he was born in Los Angeles, the UFC doesn’t count him as the promotion’s champion from Mexico, the same way that Cain Velasquez didn’t get that title. Regardless, it was amazing to see what Moreno did against Figueiredo in their rematch at UFC 263. Moreno proved without a doubt that he’s the best flyweight on the planet right now by taking out Figueiredo by third-round finish, especially with Cejudo retired and no longer actively fighting. Although it would be a fun fight, a matchup between Cejudo and Moreno doesn’t seem feasible given their history.

As for what’s next for Moreno, there is the possibility of a trilogy with Figueiredo given how exciting these first two fights were, but more than likely it will be someone like Askar Askar — who also had a draw with Moreno — or Alex Perez. Now that Moreno is the champ, there are plenty of fresh matchups and the UFC’s flyweight division is looking very strong again.