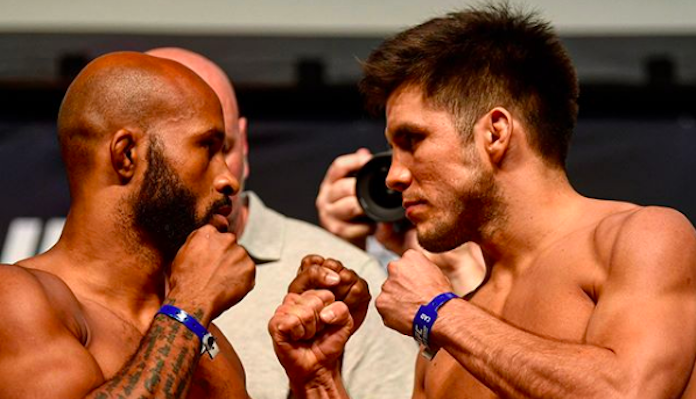 Former UFC bantamweight champion Henry Cejudo said that he believes Demetrious Johnson is the greatest MMA fighter of all time, otherwise known as the GOAT.

Cejudo shocked the MMA community when he retired immediately after knocking out Dominick Cruz in the main event of UFC 249. The former UFC bantamweight and flyweight champ said that he is retiring to start a family. “Triple C” said that he’s happy with what he’s accomplished in his MMA career and he is proud to go out on the top of his game.

Speaking to the media following the event, Cejudo was asked what the pinnacle of his career was. He pointed to his split decision win over Demetrious Johnson at UFC 227 in August 2018, a huge upset that saw Cejudo capture the UFC flyweight title.

Henry Cejudo believes Mighty Mouse is the GOAT and beating him was the pinnacle of his MMA career. pic.twitter.com/wpv4pFHpEC

“The pinnacle of my UFC career… I think it was beating Demetrious Johnson, even though a lot of you guys probably don’t think I won… If you were to ask Triple C who was the greatest mixed martial artist of all time, it’s Demetrious Johnson,” Cejudo said (via ESPN).

There are many who consider Johnson the best MMA fighter of all time, but for him to get that sort of accolade from a guy like Cejudo must mean a lot. Cejudo and Johnson fought twice in the UFC, with Johnson knocking Cejudo out the first time they fought and Cejudo returning the favor with a split decision win in the rematch. A trilogy match between these two is something that could happen one day.

Perhaps if the UFC gives Cejudo his release following his retirement, Cejudo could potentially speak to ONE Championship about fighting Johnson for the third time. But at least for now, it’s not expected the UFC will relinquish its contractual rights to Cejudo anytime soon, even if he is now retired from MMA.

Do you agree with Henry Cejudo that Demetrious Johnson is the GOAT?