The 40-year-old Teixeira hasn’t slowed down despite being one of the oldest fights in the UFC light heavyweight division. Like a fine wine, Teixeira keeps getting better and better over the years. The Brazilian is currently riding a three-fight win streak with victories over Nikita Krylov, Ion Cutelaba and Karl Roberson and he is currently the No. 9 ranked fighter in the division.

Teixeira has fought UFC light heavyweight Jon Jones before and he lost decisively, but he continues to plug away and work towards getting another title shot. In order to get closer to a rematch with Jones, Teixeira will have to win a few more fights. That’s why he’s now calling out two fighters ranked above him in Anderson and Blachowicz.

Speaking to Combate in a recent interview, Teixeira spoke about who he wants next, and why.

“There are some new people coming up in the belt, but I’m super motivated, I want to fight with some heads now. I would like a rematch with Corey Anderson or fight with Jan Blachowicz, that would be a good fight for me. I would like to fight them, and who knows early next year I’m not facing these guys? We will see. I want to fight these guys who are in the belt straight too. I’m a guy who always fought the tops. The guys I lost always fought for the belt, because it was kind of a fight for the chance to fight for the belt. I lost to (Alexander) Gustafsson and to Anthony Johnson and they fought for the belt. Then I won three fights against tough guys and now I have to get a name guy like Corey Anderson or Blachowciz to get in the goal face again,” Teixeira said. 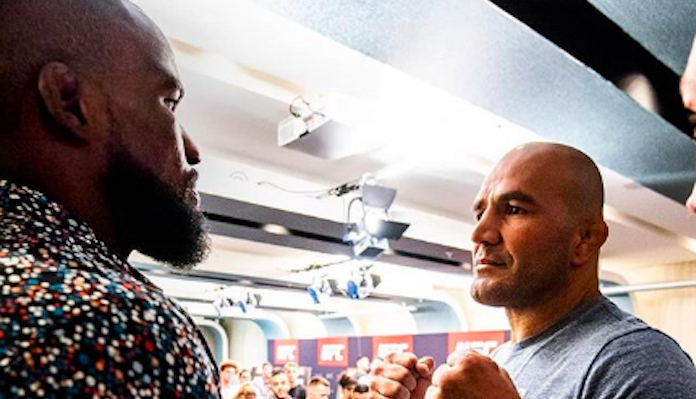 Teixeira has already fought Anderson and lost a decision last summer. Anderson is chasing gold himself, but he is currently without an opponent and could perhaps view Teixeira as a tune-up fight while he waits for a title shot. As for Blachowicz, he’s in the same boat as Anderson in that he is currently on the outside of the title picture looking in with Dominick Reyes set to fight Jones at UFC 247. Though Teixeira is ranked lower in the division, perhaps Blachowicz would be interested in the fight in order to prove his worth after a miserable fight against Ronaldo “Jacare” Souza at UFC Sao Paulo.

Are you interested in seeing Glover Teixeira fight either Corey Anderson or Jan Blachowicz next?