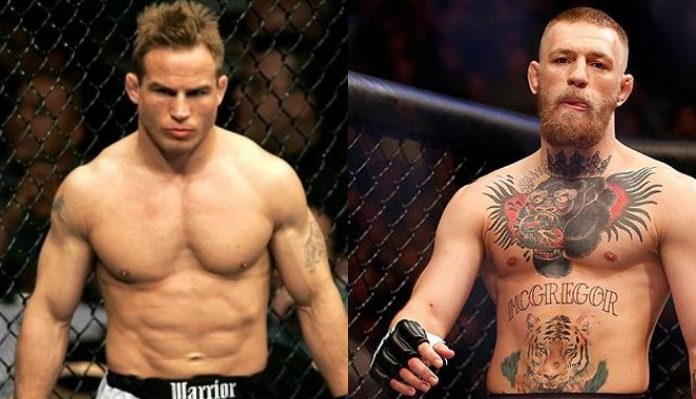 Former UFC lightweight champion Conor McGregor was not without success in his anticipated UFC 229 showdown with Khabib Nurmagomedov, but the real story of the fight was the Russian champion’s grappling. Time and again, Nurmagomedov dragged McGregor to the canvas, where he would bully him with ground strikes and ultimately submit him.

In the week since Conor McGregor’s loss to Khabib Nurmagomedov, there’s already been talk of a potential rematch between the pair. If McGregor is going to win this potential rematch, of course, he’ll have to make some serious improvements to his wrestling — and former UFC lightweight champion Sean Sherk is hoping to help him with that.

The former champ made his offer to Conor McGregor on his official Facebook page.

Not sure if the McGregor/Khabib rematch will take place but if it does hiring a guy like Jordan Burroughs to come out and teach you how to wrestle isn’t the keys to victory. You can’t learn how to out wrestle a guy like Khabib who’s been wrestling since birth in just a matter of weeks just by training with a world champion. It doesn’t work that way.

The keys to victory for the rematch would be to hire a guy like myself for instance. Who’s fighting style is almost identical to Khabib. I made a career out of using my superior Wrestling ability to outfight opponents in a cage while still remaining three-dimensional. I know how to beat guys like myself. I know what works To stifle takedowns, catch submissions on the fly, stop ground and pound from being affective and escapes from bottom based on the same techniques and philosophies that worked on me.

Mixed martial arts is no longer a game of style vs style. It’s man versus man, game planning/ executing game plans and evolution.

The best athletes in the world take a loss as an opportunity to learn and evolve.

I have the experience and credentials to prove it.

Do you think Conor McGregor would benefit from some training with his fellow former UFC lightweight champion Sean Sherk?