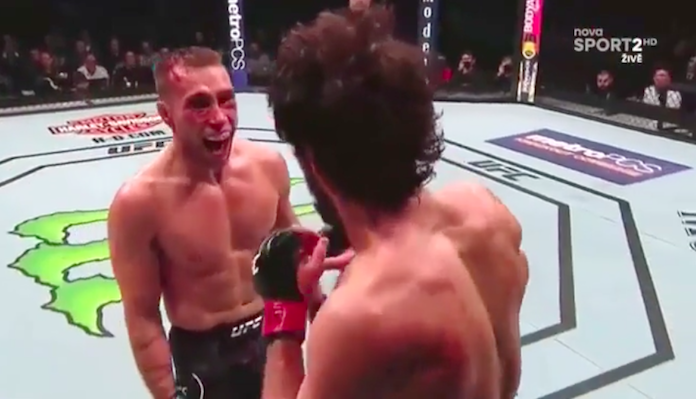 Former “Fight of the Night” winner Kyle Bochniak has been released by the UFC and he is currently a free agent looking for work.

Bochniak himself revealed the news that he was released by the UFC on his social media. This is what Bochniak told his fans on Instagram.

“Currently exploring free agency & excited to see what the future holds. The journey is far from over. Let’s get this work. Who would you like to see me sign with?”

Bochniak is most fondly remembered for his war against top contender Zabit Magomedsharipov at UFC UFC 223. Although he lost a unanimous decision, he put up one of the most competitive fights anyone has had against Magomedsharipov and both men rewarded $50,000 each for their tremendous fight.

Overall “Crash” has just an 8-5 record in MMA including a mark of 2-5 inside the UFC. With so many fighters being signed off of Dana White’s Contender Series, the promotion has to make some tough cuts and even though Bochniak is an exciting fighter, his record shows that he just wasn’t getting the job done on a consistent basis and the UFC decided he was expendable.

Bochniak is not likely going to be without a home for much longer. The PFL could make a lot of sense for him and he could thrive in a tournament format with his durability and cardio. Bellator could also come calling as it is always looking for exciting fighters. ONE Championship and RIZIN could also potentially make a play for Bochniak.

Although his UFC career has come to an end, Bochniak is likely going to be snatched up shortly by another organization and fans willy likely be able to tune in and watch him put up exciting fights in just a short order.

Where would you like to see Kyle Bochniak fight next?