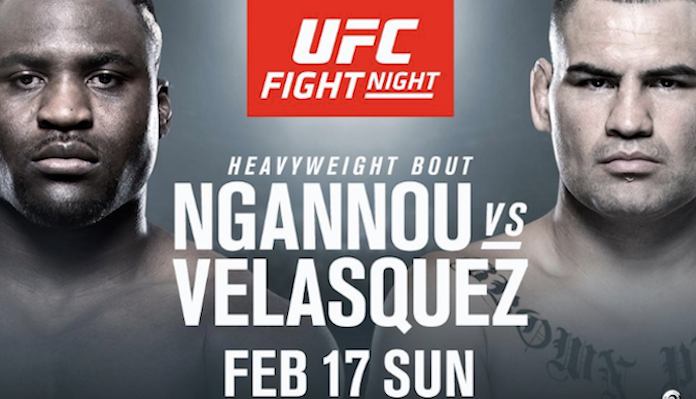 The UFC’s first ever event on ESPN is upon us. In the main event, former UFC heavyweight champion Cain Velasquez will be making his long awaited return to the Octagon to take on Francis Ngannou.

Ahead of this heavyweight fight, which could have title implications, BJPENN.com reached out to several pro fighters to get their predictions. And, for the first time in the history of this series, the fighters were unanimous in their answers.

Brad Pickett, retired UFC bantamweight: Cain all day long. But, it all depends on what Cain comes back at. If it is Cain of anything close to what he used to be like, Cain 100 percent.

Renato Moicano, UFC featherweight: This is an easy one. Cain Velasquez will win for sure.

Anthony Pettis, UFC lightweight/welterweight: Cain. I want Cain, he is my boy. The wrestling game on Cain will be too much, you saw the Stipe fight. I think Cain.

Max Griffin, UFC welterweight: I think Cain. Francis is not a wrestler and Stipe showed that. I think Cain is the best heavyweight wrestler we have had, so I think Francis is in big trouble. Then, coming from AKA with DC and all that. I’m going Cain all the way.

Alonzo Menifield, UFC light heavyweight: I’m going to go with Cain because he is a wrestler. I like Cain and I like wrestling.

Damien Brown, RIZIN FF lightweight: Cain I think will win by dominant ground and pound. As long as he doesn’t get caught with one of those massive sledgehammers that Ngannou has.

Diego Ferreira, UFC lightweight: I think Cain Velasquez. He is a really great fighter and I think he has a little bit left on his fight life.