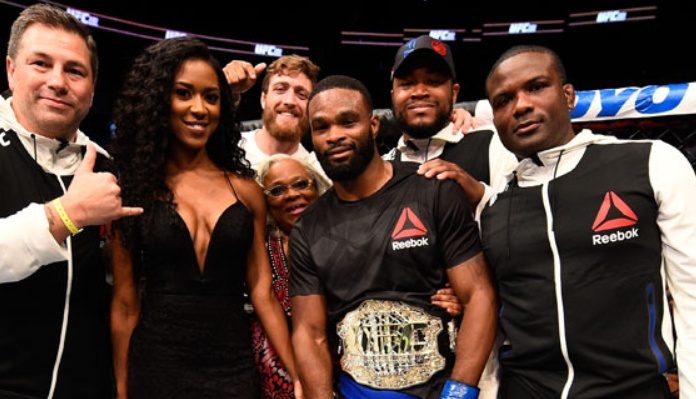 Current welterweight champion Tyron Woodley seems to have a planned scheduled for 2019, including his next title defense against Kamaru Usman at UFC 235 on March 2 in Las Vegas.

While many expected Woodley’s next title defense to come against bitter rival Colby Covington, the champion accepted Usman without hesitation. Although he still plans on fighting Covington, Woodley has bigger plans for 2019 and that includes a run at the middleweight championship.

In an exclusive interview with BJPenn.com, Woodley’s coach Din Thomas acknowledges that Covington deserves the title shot and eventually believes the fight will happen.

“Colby does deserve the title shot,” Thomas said. “Tyron had to eat it for two years, Colby’s been poking him with a stick for two years and he’s earned it, and we recognize that. Colby beat everyone in front of him, he won the interim belt, and said what he said so Tyron was ready for him but then Usman came along.”

With the desire to fight Covington being there, Thomas says he believes that Usman should have had to got in line and waited for his opportunity at the belt, but the champion truly doesn’t care either way.

“Usman in his own way earned the right to fight Tyron but we felt he should’ve gotten in line,” Thomas said. “At the end of the day, it doesn’t matter to Tyron.

“Tyron said he’s going to fight both of these guys, it doesn’t matter who’s first. Unfortunately, Tyron doesn’t get to pick who’s first, the UFC does. They put Usman in, what’s done is done, and after Usman, it’s Colby. We aren’t going to complain about it because he planned on fighting them both .”

As far as Woodley’s goals to face both Usman and Covington then jump to middleweight, Thomas says he’s definitely down with that plan especially considering Woodley’s resume and the fact that he’s getting older.

If Woodley makes the jump to middleweight and becomes champion when he moves there, Thomas sees him staying at the bigger weight class rather than return to welterweight.

While he doesn’t want to speak on the champion’s behalf, he doesn’t see why he’d want to drop 15 extra pounds to return to welterweight if he becomes champion at middleweight.

“The thing is, Tyron’s not a spring chicken anymore,” Thomas stated. “Once he goes to middleweight, there’s no way he’s going to want to go back to welterweight. I mean, I’m speaking for him which I shouldn’t be but, I just can’t imagine him having the middleweight belt and wanting to drop an extra 15 pounds and return to the welterweight division. I just can’t really see that happening.

“What I can see happening is, going up to middleweight and fighting Kelvin Gastelum if that fight happens. Tyron’s already beat him before. I don’t see how that fight is any different than before because Kelvin didn’t even make weight the last time they fought.

“If not, I see him fighting Robert Whittaker who is a great and tough fighter, but I still see Tyron winning that fight,” Thomas continued. “Once that happens I don’t see him dropping back to fight at welterweight where . I see him embracing the challenges at 185 if he becomes champion.”

Tyron Woodley is ready to accept his next two challengers at welterweight but seems pretty set on a future move to middleweight. With his coaches behind him and new challenges awaiting him, it’ll be interesting to see 2019 has in store for ‘The Chosen One’ who has four consecutive title defenses at welterweight.