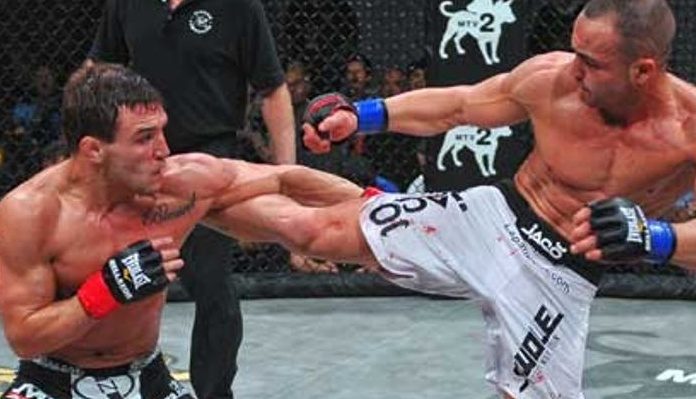 Eddie Alvarez tuned in to watch his former rival Michael Chandler make his Octagon debut against Dan Hooker at UFC 257.

Alvarez and Chandler have a storied history having competed for the Bellator lightweight world title on two occasions. Their first encounter occurred at Bellator 58 in November of 2011 where Chandler dethroned Alvarez with a fourth round submission.

The pair would collide again two years later at Bellator 106, with Eddie Alvarez emerging victorious by way of split decision to reclaim the lightweight strap.

Alvarez of course went on to make his UFC debut in 2014, and later captured the promotions coveted lightweight championship by stopping Rafael dos Anjos in 2016.

After losing the belt to Conor McGregor, the Philadelphia native would compete two more times in the UFC before moving over to ONE Championship.

Meanwhile, Michael Chandler recently followed in the footsteps of Eddie Alvarez by making the move from Bellator to the UFC.

Chandler debuted at last months UFC 257 event against perennial division contender Dan Hooker. ‘The Hangman‘ was expected to pose a stiff challenge for the former Bellator champion but that did not prove to be the case. Instead, Michael Chandler was able to score his third consecutive first round knockout.

Eddie Alvarez recently weighed in on Michael Chandler’s impressive UFC debut during an interview with MMAJunkie:

“Mike Chandler coming out and, in your debut, with all that pressure, with all them people saying, ‘You’re not this and you’re not that,’ to be able to go out there and execute the way he did, it was just a beautiful night for MMA.” Eddie Alvarez said. “I think a lot of times in this sport, they don’t care if you’re the bad guy or good guy. The fight gods give the winner to whoever the winner is, and the good guys conquered that night. It doesn’t always go that way, but it’s beautiful when it does.”

Eddie Alvarez will continue his quest for another MMA world title when he squares off with fellow ONE lightweight title challenger Iuri Lapicus this April in Singapore.