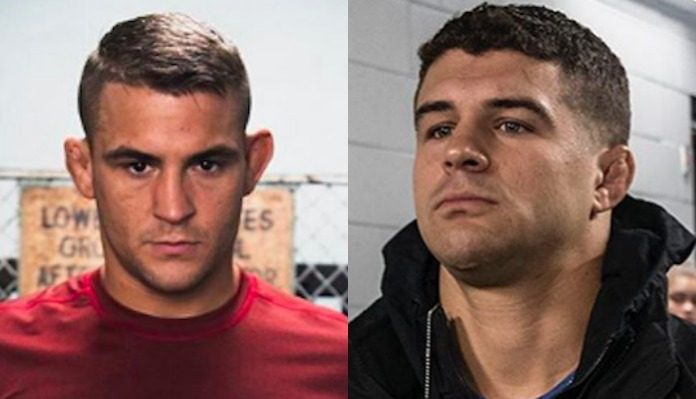 News of Georges St-Pierre’s planned retirement prompted UFC lightweight champion Khabib Nurmagomedov to make one final effort to goad him into a fight. While Nurmagomedov’s call for a fight with St-Pierre excited some fans, however, it didn’t go over well with the many UFC lightweight contenders awaiting a shot at the champ’s belt, such as Al Iaquinta and Dustin Poirier.

Poirier was first to react to today’s GSP vs. Khabib talk, first expressing his frustration with an emoji, and ultimatately calling for the UFC to release him, evidently fed up with waiting for a title shot.

“These guys should just release me,” Poirier wrote.

Al Iaquinta, who has recently been calling for a fight with Dustin Poirier, chimed in next. He echoed Poirier’s sentiments with the use of the same emoji. He then also called for his UFC release, before finally sharing his feeling that MMA barely registers as a sport anymore.

“Release me too,” Iaquinta wrote.

“F**k this s**t it’s not even a sport anymore,” he added in a followup Tweet.

Khabib Nurmagomedov was recently suspended nine months by the Nevada State Athletic Commission (retroactive to October), with the possibility of a three-month reduction if he completes an anti-bullying campaign. That being said, he plans to hold out until November as a show of solidarity with his training partners who were suspended one year by the commission. If he fights Georges St-Pierre as he intends in November, it could conceivably be well over a year before he defends his title again.

Evidently, both Dustin Poirier and Al Iaquinta are ready to fight for the title, and are getting fed up with the waiting and uncertainty. What’s your take on the situation?