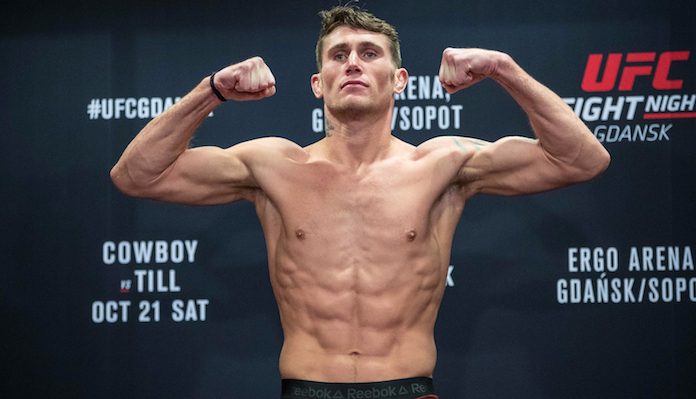 Former UFC welterweight title challenger Darren Till has been in the headlines over the past few days surrounding a possible return at UFC London.

Days after he called Colby Covington a rat on Twitter, BJPENN.com’s Chris Taylor reported that the UFC was looking to book a bout between Till and “Chaos” for the March 16 event in England.

“I’m told the UFC is looking to book a welterweight fight between Colby Covington and Darren Till for #UFCLondon on March 16. Covington has recently stated that he will hold out for his promised title shot, so we shall see what happens.”

The news came as a bit of a surprise, as following his submission loss to Tyron Woodley at UFC 228, Darren Till had stated his intention to move up to middleweight (185-pounds).

In order for a bout between Till and Covington to come to fruition, the UFC will apparently have to put a title on the line or have “championship money” on the table for Colby.

Whether a deal gets done for Covington to fight Till at UFC London remains to be seen.

With that said, it appears that Darren Till will be competing at UFC London regardless if “Chaos” signs on the dotted line or not.

“The Gorilla” took to his official Instagram account with the following photo and caption – hinting at a March 16 return.

Darren Till has plenty of options outside of Covington.

Surging division contender Leon Edwards is looking for an opponent at the very same event. A rematch with Stephen Thompson is also an option. Till and “Wonderboy” went to battle for a full twenty-five minutes at UFC Liverpool, with the hometown favorite emerging victorious by way of a controversial judges decision.

However, if Darren Till has his way, it appears he would prefer to throw down with either Colby Covington or Conor McGregor.

The latter seems like a bit of a stretch, but hey, one can dream right?

Who would you like to see former UFC welterweight title challenger Darren Till fight next?