With that said, many fans and analysts believe that “DC” needs to earn a victory over former light heavyweight champion Jon Jones before he can be considered the ‘Greatest Of All Time’.

Daniel Cormier (21-1 MMA) has already squared off with ‘Bones’ on two occasions during his illustrious career, with Jones emerging victories in both contests.

The bitter rivals most recently squared off in the main event of UFC 214, with Jon Jones emerging victorious by way of third-round knockout. That fight was later overturned to a no-contest, this after it was revealed that Jon Jones had failed one of his USADA drug tests. 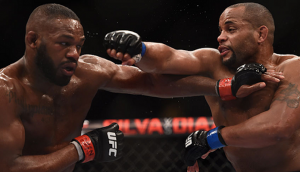 Despite their heated rivalry, Jon Jones recently said that he has no interest in “granting” Daniel Cormier a third opportunity to defeat him.

Those comments did not sit well with “DC”, who fired back at Jones shortly following his UFC 230 win over Derrick Lewis.

“Giving me a shot?” Daniel Cormier asked at the UFC 230 post-fight press conference (as transcribed by MMAJunkie). “Seriously, giving me a shot? Here’s the deal when it comes to Jones: It’s hard for me to really take anything seriously because you say, ‘I don’t want to give you a shot,’ and, ‘You don’t deserve it. I beat you.’ He said he knocked me out, which he did, and you guys know I’ve always said he won the fight. He once put like a video up of a little girl kicking a girl in the head. I said, ‘Look, man… she set that kick up perfect. But you were on steroids, dog. You can’t use that.’ It’s the same thing. I’m sure USADA said, whatever, but you still had steroids in your system. It does not matter. You can’t be on steroids in no way, shape or form. That’s not fair.”

“For him to say, ‘I don’t think he deserves a title shot,’ or ‘I’m not going to grant him’, who are you to grant me anything?” Daniel Cormier questioned. “I’m the guy that’s been here this whole time. Three years I’ve been the light heavyweight champion because this dude can’t stay out of trouble.”

Do you think we will get to see a third fight between Daniel Cormier and Jon Jones?