Conor McGregor is the biggest star in MMA and one of the biggest stars in combat sports. The Irishman brought the sport into the mainstream by his trash-talking and his ability to finish opponents.

But, according to UFC president, Dana White, he says what makes McGregor such a big star is his personality. He says the Irishman has the ‘it’ factor and when he fights it is such a big deal.

“Conor is one of those guys who’s got this incredible personality, who has that ‘it’ factor that makes him a big star. But most importantly, the kid comes in and puts on unbelievably exciting fights,” White said in a recent interview with UFC.com. “And everything from him showing up to the arena, to the press conference, to the weigh-ins are all just as entertaining and exciting as the fight. He’s got people on both sides, people who hate him and people who love him. But, everybody is excited to see him back.”

Conor McGregor, of course, will make his long-awaited and highly-anticipated return to the Octagon on Jan. 18 against Donald Cerrone. The scrap will be the main event of UFC 246 and it will also be at welterweight. It will be the first time the Irishman fights since losing by submission to Khabib Nurmagomedov at UFC 229. 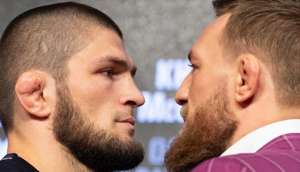 Should McGregor beat Cerrone, White has made it clear the path is there for the rematch between “Notorious” and Nurmagomedov. That lucrative fight would only make McGregor a bigger star and bring more eyeballs to the sport.

Love him or hate him, Dana White makes it clear, everyone is excited to see Conor McGregor fight.

Do you agree with what Dana White said as to why Conor McGregor is such a big fight? Sound off in the comment section, PENN Nation!