Sunday marked the one-year anniversary of the infamous Ben Askren for Demetrious Johnson trade between the UFC and ONE Championship. Replying to a fan on social media, UFC president Dana White called it an “amazing trade” for the UFC.

It was one year ago when the UFC and ONE Championship made history with MMA’s first-ever trade. Headed to the UFC was former ONE and Bellator welterweight champion Ben Askren, while headed to ONE was former UFC flyweight kingpin Demetrious Johnson. It was a surprising move for both organizations, but one that ultimately made sense for both.

Since the trade, Johnson has gone a perfect 3-0 in ONE Championship and recently won the promotion’s flyweight Grand Prix. He’s been every bit as good as advertised as he continues to build his legacy as one of the pound-for-pound greats in MMA history.

On the other hand, Ben Askren has struggled in the UFC with a 1-2 record. He won via controversial submission over Robbie Lawler in his UFC debut, was knocked out in five seconds by Jorge Masvidal, and most recently lost by third-round submission to Demian Maia. The results inside the Octagon just haven’t been there for Askren. On the other hand, he has continued to generate fan interest with his big mouth despite a losing record.

Following Maia’s submission win over Ben Askren at UFC Singapore on the weekend, a fan on social media criticized the Askren-for-Johnson trade as the “first and worst trade in MMA history.” UFC president Dana White saw the comment and lashed back at the fan.

“u sir are the only guy on this thread with a brain. Ben was an amazing trade!!!” 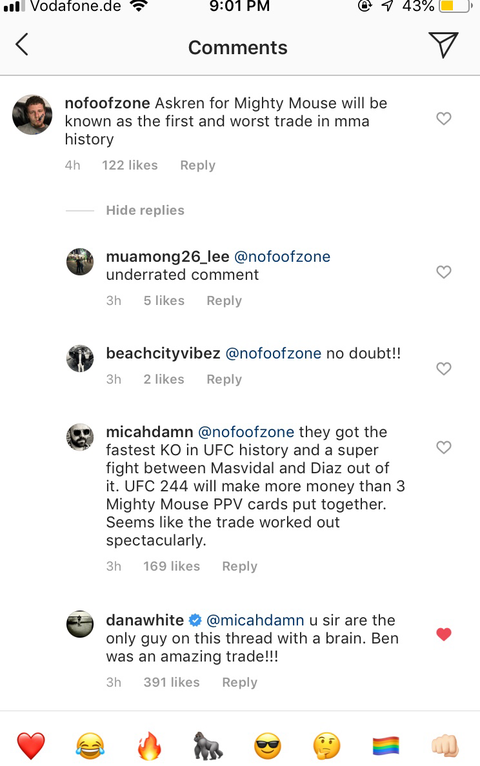 White’s opinion is sure to generate plenty of debate as there is a segment of fans who believe the UFC lost the trade hands down, while many still feel like it was the right move regardless of Ben Askren’s poor showing so far inside the Octagon. With no right or wrong answer, it’s a debate that is likely going to rage for years to come.

Who do you believe won the Ben Askren for Demetrious Johnson trade?