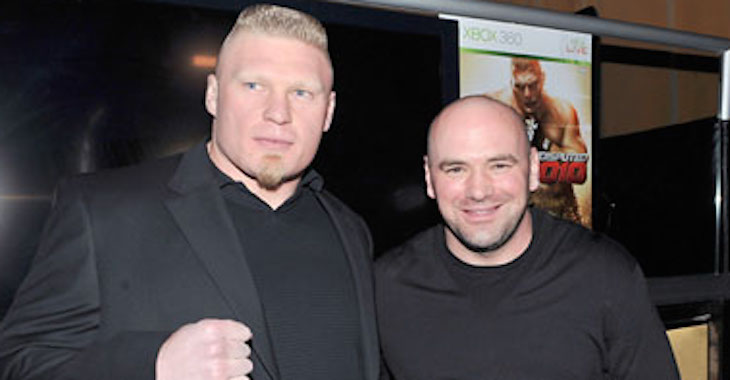 After a year of speculation that his return was happening, former UFC heavyweight champion Brock Lesnar decided not to return to the UFC and opted to re-sign with WWE instead. Following Lesnar’s decision, the UFC booked a heavyweight title rematch between champion Daniel Cormier and former champion Stipe Miocic, who waited out the rumors of Lesnar’s return, and got the rematch he had been calling for.

While there were reports that Lesnar and the UFC could not come to an agreement because of their new ESPN deal, UFC President Dana White shut those rumors down immediately. Now that the dust has settled with the heavyweight title fight, White gave his thoughts on the former champion sticking with WWE. Speaking on ESPN MMA’s Instagram ahead of the 2019 Contender Series season premiere, White was asked about Brock Lesnar’s decision and he said he believes Lesnar made the right decision.

“I wasn’t pissed at all. Brock had a good run here. It’s been fun. Listen to fight in this business you have to be 100 percent invested. You’ve got to be in. It’s not where his head was. He made the right decision.”

Brock Lesnar has not competed in the UFC since he defeated Mark Hunt at UFC 200 but he was then suspended by USADA for a failed drug test following the fight. After his suspension came to an end, speculation started to build that Lesnar would return to the UFC and he made waves by entering the Octagon after Cormier defeated Miocic at UFC in the summer of 2018, and pushed the newly-crowned heavyweight champion during a post-fight interview confrontation.

At the time of his victory, Cormier became the second fighter ever to hold two belts simultaneously and ended the reign of Stipe Miocic who had defended the heavyweight title the most consecutive times in UFC history.

Do you agree with Dana White that Brock Lesnar made the right decision to stick with the WWE?