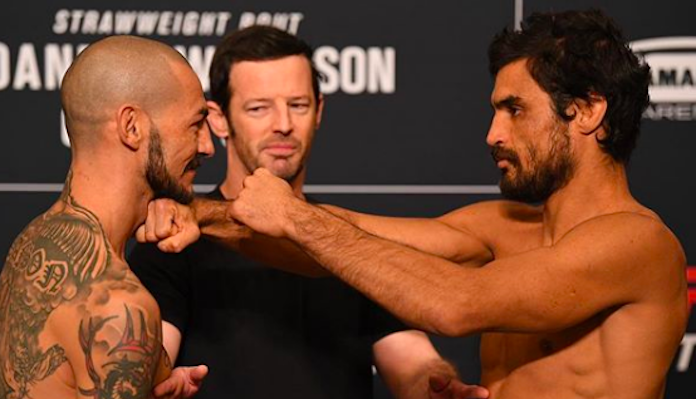 Kron Gracie had quite a bit to say about Cub Swanson ahead of their UFC Tampa fight. One of his critiques related to Swanson’s willingness to move from gym to gym in search of new training opportunities. Gracie viewed this as disloyalty.

After he defeated Gracie by unanimous decision at UFC Tampa, Swanson responded to this comment. He explained why he moves around so much, and actually offered some advice to his vanquished foe.

“One of the biggest things he said that maybe I’m not loyal,” Swanson said (via Bloody Elbow). “And in his day – which is old school – is you stick it out with somebody. But we’re in an era where you’ve got to learn what everyone knows. You’ve got to be a student of the game. You’ve got to travel. That’s what a real samurai does.

“My advice to him is travel. Go be humble,” he added. “Go out and get as good as possible. Train with everybody. You stick at one gym, you’re not gonna grow. I feel like he was wrong in that aspect.”

With his win over Gracie, a clean-sweep on the judges’ scorecards, Swanson rebounds from a four-fight skid — consecutive losses to Brian Ortega, Frankie Edgar, Renato Moicano and Shane Burgos. The veteran, who has long stood out as one of the world’s premier featherweights, is 26–11 overall.

This loss to Swanson marks Gracie’s first defeat as a professional mixed martial artist. Prior to this first taste of defeat, he won five straight fights, all by submission. His most notable wins came against veterans Alex Caceres in his UFC debut, and Tatsuya Kawajiri in the RIZIN Fighting Federation ring.

Unfortunately, he believes the judges got it wrong and that he deserved the win over Swanson.

Do you think Gracie will heed this advice from Cub Swanson?