Cris Cyborg is explaining why she takes issue with fans calling Amanda Nunes the GOAT of women’s MMA.

Amanda Nunes (22-5 MMA), currently holds both the UFC featherweight and bantamweight titles. Nunes most recently avenged her loss to Julianna Peña (11-5 MMA) and reclaimed her bantamweight belt at UFC 277 this past July.

Cris Cyborg (26-2 MMA) is taking issue with fans referring to Nunes as the GOAT (Greatest Off All Time). Cyborg parted ways with the UFC in 2019 and signed on with Bellator.

Cyborg and Nunes have a history, they competed back in December of 2018 at UFC 232. It was to be Nunes who defeated Cyborg by knockout at 0:51 of Round 1. That loss snapped Cyborg’s 14-year unbeaten streak. 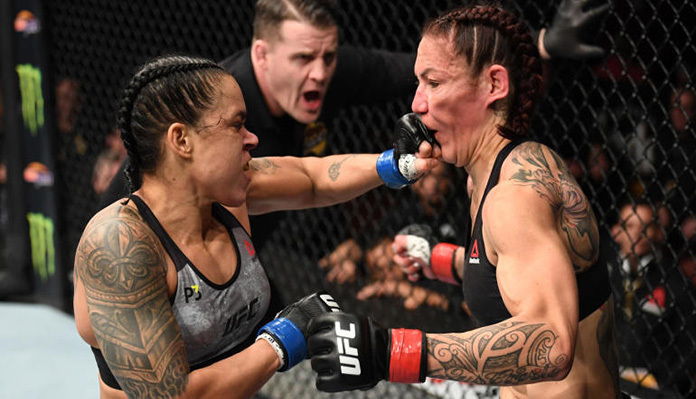 In an interview with Henry Cejudo, Cris Cyborg qualified why Amanda Nunes should not be called the GOAT of women’s MMA (h/t MMAJunkie):

“You guys call Amanda GOAT, but man, she has more losses than me. She don’t stay 14 years undefeated. OK, I lost the fight (against) her, yeah, but it happens. You know, sometimes it’s not your day. Sometimes it happens. But the history, how long, it’s not just about one fight.”

It is true that Cyborg, 37, has more wins than Nunes and less losses plus she has held titles in the UFC, Strikeforce and Invicta FC. The Brazilian is currently the reigning Bellator women’s featherweight champion, with four title defences.

While speaking to MMA Junkie, Cyborg had this to say about the possibility of a rematch with Amanda Nunes:

“If Amanda Nunes gets out of the UFC, this rematch can happen. If she just continues in the UFC, it’s hard to happen. The UFC doesn’t like to pay the fighters.”

Do you agree with Cris Cyborg that Amanda Nunes doesn’t necessarily deserve ‘GOAT’ status? Would you like to see a Cyborg vs Nunes II?

This article appeared first on BJPENN.COM
Previous articleJake Paul says he’s willing to entertain rebooking a fight with Tommy Fury as long as certain conditions are met
Next articleKamaru Usman claims Leon Edwards “knows” that he’s still the best welterweight in the UFC: “I’m still a champion in my head”
© Newspaper WordPress Theme by TagDiv