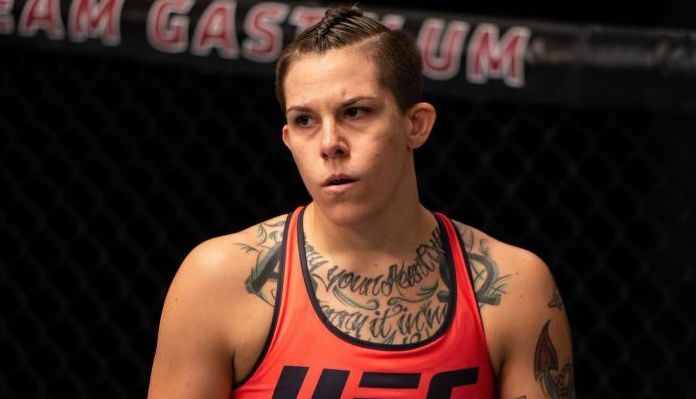 Disaster has struck in the life of UFC bantamweight contender Macy Chiasson.

On Sunday, during a severe windstorm in the Dallas area, a construction crane collapsed and fell on her apartment building, destroying her home and all of her possessions. She was lucky to escape with her life and her dog.

#BREAKING: Residents Of Dallas' Elan City Lights Apartments Damaged By Crane Will Have To Be Permanently Relocated https://t.co/k3kZdoz2Ue pic.twitter.com/X9YIDsieuu

One person unfortunately died in the accident.

“I heard a little bit of something, and I was like, ‘There’s no way that they’re doing construction right now on a Sunday,’” Chiasson told TMZ (via Yahoo! Finance). “All of the sudden, when I said that to myself, I heard a loud boom. I could hear, whatever it was, kind of falling through the ceiling floor by floor. Once I heard that, I called my dog … and we ran out.”

Macy Chiasson sustained a foot injury as she made her escape. She lost all of her worldly possessions in the accident, and is now without a place to stay. She is pursuing legal action against Bigge Crane and Rigging, the company that owned the crane. The company is also being investigated after reportedly being cited 18 times by the Occupational Safety and Health Administration (OSHA) over the last decade.

“No one was prepared for anything,” Chiasson said. “People were in their underwear, they had several people that were completely covered in debris and dust and bleeding. It was terrible. I’ve completely lost everything. I don’t have anything. I have literally this shirt, a pair of shoes and shorts that I have on. I have nothing but my dog. Everything’s gone.”

Macy Chiasson last fought at UFC Ottawa in May, when she defeated Sarah Moras by TKO. In her next most recent fight, she debuted in the UFC with a devastating knockout of Gina Mazany. She’s now 5-0 and firmly embedded as a member of the bantamweight top-15.

Hopefully the UFC and the larger MMA community are able to help her out in this difficult time.