Holloway (22-6 MMA) is set to return to action today for the first time since laying a beating on Calvin Kattar back in January. The former UFC featherweight champion has gone 2-3 over his past five fights overall.

Meanwhile, Yair Rodriguez (13-2 MMA) will be ending a two-year hiatus at UFC Vegas 42. ‘El Pantera’ last competed in October of 2019, where he earned a unanimous decision victory over veteran Jeremy Stephens.

Prior to today’s main event clash, Conor McGregor took to Twitter where he threw shade at his former opponent in Max Holloway.

Best boxer my ass crack. The guys been smacked the most smacks in ufc history! Most shots absorbed is not best boxer guys I’m sorry, and I love the kid.

“Best boxer my ass crack. The guys been smacked the most smacks in ufc history! Most shots absorbed is not best boxer guys I’m sorry, and I love the kid.” – McGregor wrote in reference to Holloway having absorbed the most head strikes in UFC history.

Conor McGregor (22-6 MMA) and Max Holloway of course have a history. The pair met way back at featherweight way back in April of 2013, with ‘Notorious’ emerging victorious by way of unanimous decision. 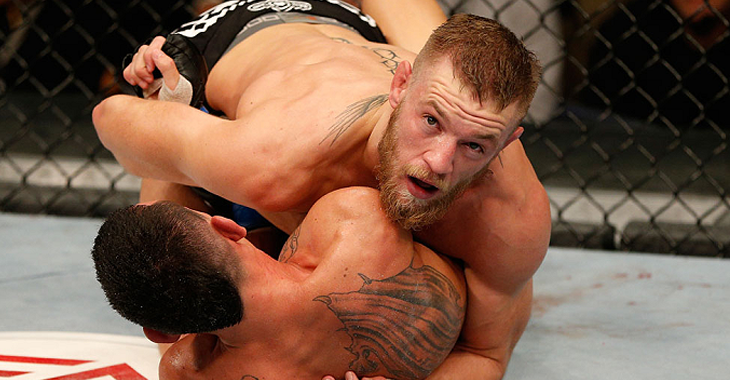 In addition to attempting to ruffle the feathers of ‘Blessed’, Conor McGregor also recently took aim at Kamaru Usman. The UFC’s reigning welterweight champion had chimed on the Irishman’s Twitter beef with Jorge Masvidal, prompting the following remarks.

“Ye you’re missing something bro for sure. Don’t quite know what tho. Originality maybe? I don’t know, something. It’s like, nobody cares. No one cares what the f*ck you’re at. And you try so hard too, I just don’t know. Somethings missing for you tho for sure. God bless anyway 🙏” – Mcgregor replied to Usman.

What do you think of Conor McGregor taunting Max Holloway prior to his UFC Vegas 42 main event fight with Yair Rodriguez? Share your thoughts in the comment section Penn Nation!