Earlier tonight, McGregor had taken to Twitter where he captioned a post of his past accomplishments with the message “Done it all, still here”.

Today just so happens to mark the five-year anniversary of Nate Diaz’s second round submission victory over Conor McGregor at UFC 196. With that said, ‘The Stockton Slugger’ took the opportunity to use the Irishman’s words against him.

“I f*cked you up and you never got it back, but u acted like you did. Now you get a rematch every time you get your ass beat like a spoiled little bitch would. I’ve done it all and I’m still here. Plus, the guy who just beat your ass is a scared Lil bitch also. Fuck you both #realfighter“ – Nate Diaz wrote in reply to Conor McGregor.

McGregor (22-5 MMA) would later respond to Diaz, but proceeded to delete the post shortly after.

Check out the cryptic message ‘Notorious’ had sent his longtime rival below:

Nate Diaz is of course not happy that Conor McGregor and Dustin Poirier plan to run things back for a third time later this summer. In the pairs most recent collision at UFC 257, ‘The Diamond’ exacted his revenge on the Irish star by earning a second round TKO victory. 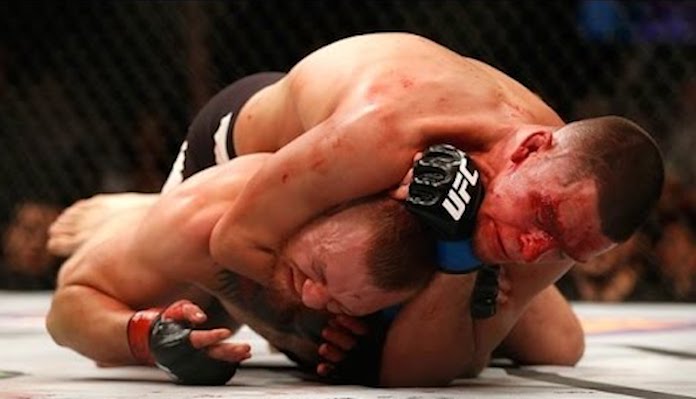 Like Poirier, Nate Diaz has also gone 1-1 in his two fights with McGregor. ‘The Stockton Slugger’ submitted ‘Notorious’ in their first fight at UFC 196, with Conor taking home a majority decision win in their rematch at UFC 202.

Who would you prefer to see Conor McGregor have a trilogy fight with, Nate Diaz or Dustin Poirier? Share your thoughts in the comment section PENN Nation!