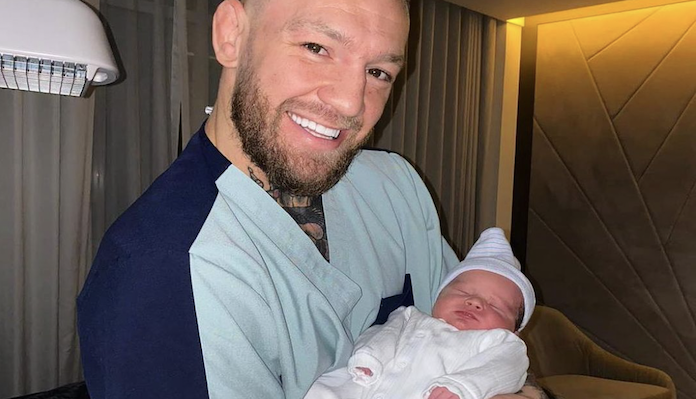 McGregor and his fiancee Dee Devlin already have two children, four-year-old son Conor Junior and two-year-old daughter Croia. They have now welcomed their third child to the world as “Notorious” took to his Instagram to share a photo of his new son, Rian.

The McGregor Clan is now a family of 5 Healthy baby boy delivered! Baby and Mammy Wonder Woman are doing great! God I thank you for everything you give to me and my family in this world My new born son, Rían McGregor

McGregor and Devlin announced over the holidays that the family was expecting their third child, and on Monday the world saw the first glimpse of Rian. For McGregor and Devlin, it’s another blessing for what has already been an absolutely phenomenal year for their family. Even despite McGregor losing his lone fight at UFC 257 earlier this year to Dustin Poirier, he was recently named the world’s highest-paid athlete in 2021. Between the purse for his UFC bouts, his sponsorship money, and the sale of Proper No. Twelve, it’s been a huge year for the McGregor clan, and welcoming their third child is just the cherry on top.

As for McGregor, we will see him return to the Octagon this summer at UFC 264 when he takes on Poirier in their trilogy match on July 10. The two have previously met twice, in 2014 with McGregor winning the first fight by knockout at UFC 178, and then back in January at UFC 257 when Poirier finished McGregor. With the motivation of having a new baby boy, perhaps we could be looking at a highly motivated version of McGregor this summer, and that bodes well for fight fans who want to see another great fight.

We here at BJPenn.com wish our deepest congratulations to the Conor McGregor family.