Colby Covington has what it takes to beat Khamzat Chimaev according to Stephen Thompson.

‘Chaos’ is coming off of a win over friend-turned-enemy Jorge Masvidal as UFC 272. His next challenge looks likely to be against ‘Borz.’ The American has been heavily-linked with fighting the Swede. Thus far, the Stockholm-based fighter has looked almost unstoppable having finished everyone who’s stood across from him aside from Gilbert Burns.

Chimaev is the favourite to be Covington, but ‘Wonderboy’ believes the notorious cardio could get the job done in the latter stages.

Seapking in an interview with Submission Radio, Thompson raised doubts over the fight taking place but backs Covington to win, “I’m not really sure if that will happen. I don’t think Colby wants it, obviously, and especially against a guy that hasn’t made weight,” So, I don’t blame him,” said Thompson. “If it does happen, I think if it goes five-five, I think Colby’s got it if it goes in the later rounds. Just because he’s got cardio for days. And we saw the fight with Chimaev and Gilbert Burns, and Chimaev started to fatigue. And I don’t know if that’s because he did make weight, right? And he was depleted? Cause he killed himself to get down to 170. Will he be able to do it again? I don’t know,” Thompson continued. 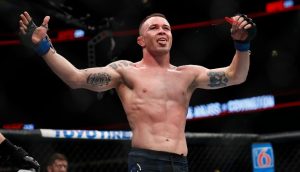 “If he doesn’t make weight, I wouldn’t fight him. I would say no. But if it does [happen], if Chimaev wins, it’s gonna have to be early on in the rounds. But if it goes all five, definitely Colby (Covington.) He’s got cardio for days, and Chimaev is just a big 170-er man. He shouldn’t even be a 170, he should be up at 185,” Thompson added.

Colby Covington isn’t the only one linked with fighting Chimaev, and Belal Muhammad has repeatedly expressed an interest in taking on the Chechnya-born fighter. Covington, Chimaev and Muhammad are currently ranked at #2, #3 and #4 respectively.There’s also #1-ranked former champion Kamaru Usman to consider.

"Step into my office": Belal Muhammad (@bullyb170) has a message for Khamzat Chimaev after his TKO of Sean Brady. 🔥#UFC280 | Full video: https://t.co/q05yxsBWzr pic.twitter.com/HyEwncT685

But, with Chimaev having commanded such attention since bursting onto the scene, any man to beat him would surely be given a crack at Leon Edwards’s belt.

Will that man be Colby Covington?

This article appeared first on BJPENN.COM
Previous articleDaniel Cormier confident Conor McGregor not returning in February despite USADA comments: “You don’t get to make your own rules”
Next articleGlover Teixeira planning to be in attendance at UFC 282 and challenge winner of Jan Blachowicz vs. Magomed Ankalaev
© Newspaper WordPress Theme by TagDiv