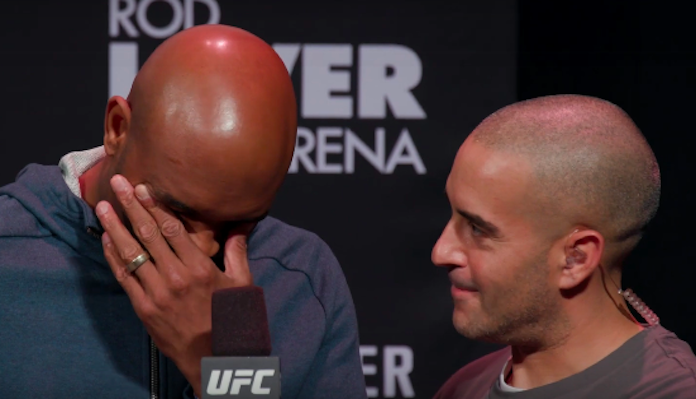 On Friday night, MMA legend Anderson Silva stepped onto the scale to weigh in for his UFC 234 middleweight showdown with Israel Adesanya.

After stepping onto the scale, Silva was asked for his feelings on the fight, and began tearing up as he addressed his fans.

“Thank you, guys, thank you,” Silva said (transcript via MMA Fighting). “I work my entire life for this sport and I try to do my best, and I need to say thank you God for giving one more time the opportunity to give great show for you guys. Thank you so much Australia, thank you Dana [White], thank you. Thank you, guys.”

This emotional moment from Anderson Silva even got to his opponent Israel Adesanya, who was stifling tears in his own post weigh-in interview.

Speaking to MMA Fighting after this dramatic scene, Silva’s conditioning coach Rogerio Camoes explained why the legend was so emotional on stage.

”That was the emotion of coming back,” Camoes said. “This is what this guy loves to do. He does it because he loves it. It’s even hard for him to say what he felt at that moment. It was surreal for me too, I had to fight back (the tears) because of the energy of being there next to him and see his emotions, see Israel getting emotional too, and Dana (White) amazed.

”That’s Anderson Silva. He’s the champion and will always be.”

What did you think of this display from Anderson Silva?