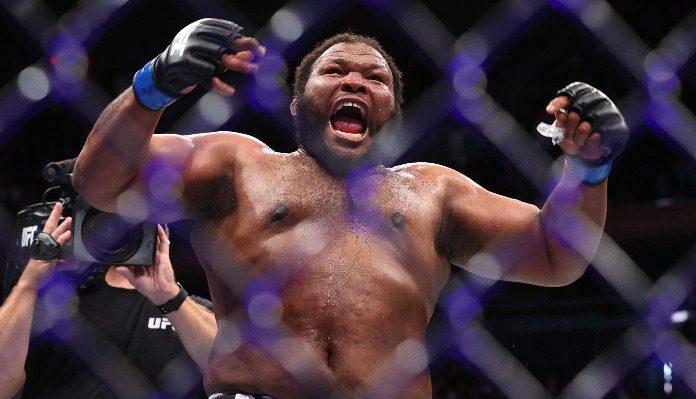 Chris Barnett is excited to return to the Octagon and build off his last win.

At UFC 268, Barnett picked up his first UFC win in highlight-reel fashion as he landed a spinning wheel kick KO against Gian Villante. Since then, Barnett says his fan base has only grown and although this is much later than he wanted to return, he is eager to face Martin Buday at UFC Vegas 51. Given that Buday beat his friend Lorenzo Hood to earn his way into the promotion, Barnett is extra motivated for this one.

“What’s crazy is, he beat my friend Lorenzo Hood on the Contender Series. I’ve been in this game for 11, 12 years now so I have been around a lot of people,” Barnett said on Just Scrap Radio on BJPENN.com. “Me and Lorenzo Hood actually met in Florida a long time ago and in 2019 we ended up fighting on a random bare-knuckle card together. We link back up there and we talk and I see he’s fighting on the Contender Series and if you watch that fight, I can say that is not the Lorenzo I have trained with. But, to boil it down, this fight with Martin coming up, I hold more to it as I think he is a young Ben Rothwell and I get a chance almost to rematch Ben with it not actually being Ben Rothwell.”

Although Barnett is just 1-1 in the UFC, given he is coming off a highlight-reel KO, he says people have told him they expect to do the same again. However, Barnett says he doesn’t care about any of that as he knows with his style, he expects a viral KO every time.

“All I’m gonna say is what I’ve been working on, I wouldn’t be surprised if another viral knockout happens again. With this fight, I’ve known about it for a while, I’ve been doing what I need to do,” Barnett said. “My camp is going amazing and the big difference between this one and that one is you will be able to see it. I’m not looking for that $50k bonus but with what I’m going to bring, I have a really good feeling it’s going to happen. I’ve been working a lot on hands and stuff and the Taekwondo guy might have a good hand knockout.”

Not only does Chris Barnett expect to get a viral KO over Martin Buday, but he wants to show off his skill set on Saturday night. He believes his ground game is underrated and he believes he will prove that on Saturday.

But, the big reason why Barnett is confident he will get the viral KO is due to his pressure. He believes always being in Buday’s face will cause him to crack and leave an opening that he will take.

“Even if it goes to the ground, I have never felt more confident in my overall MMA game. Normally it’s like, oh if I don’t land this overhand right then I don’t know what’s going to happen,” Barnett explained. “With a guy like Buday, who can take a punch and maybe stop a submission, I can’t wait because we have our punches to go into wrestling to go into submissions, and if that doesn’t work to stand back up. The pressure I’m going to put on is completely different.”

Should Barnett get another KO win, he believes he could get a big name next as the UFC looks to push him. However, the goal for Barnett is to be as active as possible and continue to build his fanbase up.

“It’s weird because he is an up and comer but he is 9-1. You never want to get tagged as a gatekeeper but I am a fan favorite,” Barnett concluded. “Honestly, with a fight like this, it just builds on my stock and after this one, a big win, you don’t really have a choice but to give me some big fights. Even though I’m sloppy I have a fanbase that loves me to death. As long as I can keep proving that I will put on a great show, that is my overall goal.”

Who do you think will win, Chris Barnett or Martin Buday?