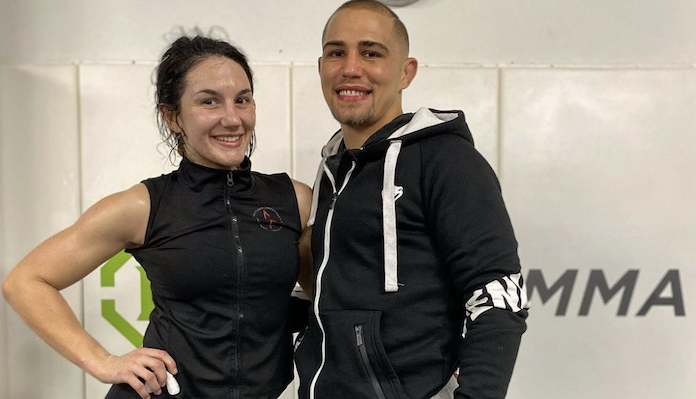 The Buys made their UFC debuts earlier this year on the same card, and it did not go well for either of them. To start off the night, JP was knocked out by Bruno Silva, and then Cheyanne was outgrappled by Montserrat Ruiz for 15 minutes. It was a disappointing debut for both of the Buys, but they were able to put it behind them and move on. Cheyanne was able to return to the Octagon in July and she knocked out Gloria de Paula with a brutal head kick to bounce back following the loss to Ruiz. As for JP, he decided to move up to bantamweight and fight Jackson at UFC Vegas 37, but he suffered another loss as he was dropped four times by his opponent en route to a unanimous decision defeat in the loss.

Taking to her social media following her husband’s loss, Buys reacted to his defeat, while taking a shot at the trolls who have suggested she should get divorced from him.

Cheyanne Buys: To my husband: To the warrior you are. I know right now things seem unsure to you. You moved to America you’re chasing your dream and it seems like your dream is just not going well for you right now. I know who you are as a person and a athlete and I know you’re going to take this and go back to the drawing board and come back from this. Most people had 0 belief in you going into this fight and you showed you’re no joke. You showed amazing heart and grit in this fight. Bumping up a division taking on a vet in the BW division, all odds against you. Idgaf what anybody has to say you a savage who’s always looking to finish his opponent. I’m always going to ride with you boo. No excuses tonight. All tonight was just a bad day, but never a bad life doing what you love to do! We are truly blessed to do what we love together. Through the highs and the lows I’m here for it all. Keep your head high. ————— —————- And to the assholes telling me to divorce him. Your all scum.

What do you think is next for JP Buys after losing to Montel Jackson at UFC Vegas 37?