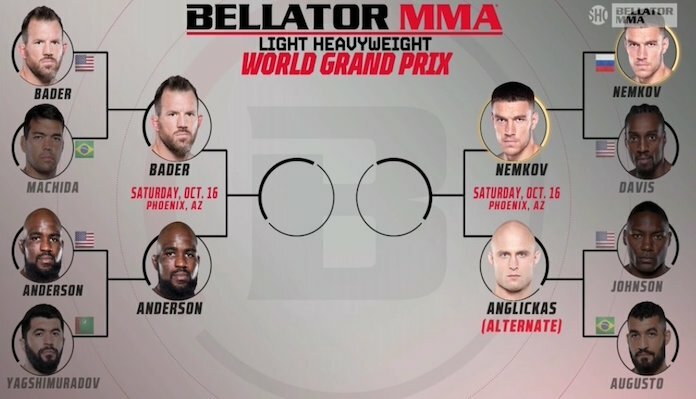 The ongoing Bellator Light Heavyweight World Grand Prix got a shakeup with Anthony Johnson out and Julius Anglickas stepping into his place.

On Saturday, Johnson took to his social media to reveal that he has been forced to withdraw from the Bellator 205lbs tournament, though he did not disclose the reason for his withdrawal. Johnson was actually set to fight Bellator light heavyweight champion Vadim Nemkov next month as part of the tournament semifinals, but that won’t be happening anymore. Instead of Johnson fighting Nemkov, he is out of the tournament, and Bellator has called upon the tournament alternate Anglickas to fill Johnson’s spot in the tournament. In fact, Anglickas will now fight Nemkov for the Bellator belt next month. Bellator officially announced the change this weekend and Anglickas confirmed it, too.

UFC fans may be familiar with Anglickas, as he was actually on Dana White’s Contender Series in 2019 and picked up a third-round submission win, though White ultimately passed on signing him. 10-1 as a professional MMA fighter overall, Anglickas is a perfect 3-0 in Bellator since his fight on DWCS. He has looked good overall in Bellator with the three wins, though the fact he has won all three fights by decision isn’t exactly impressive. Either way, Anglickas has been given good fortune here as he was not a part of the tournament heading into it, and now he is basically in the same position that Daniel Cormier was in the Strikeforce Heavyweight Grand Prix a decade ago when he came in as an alternate in the semifinals and won the fight. For Anglickas, he will be looking to do the same thing here, though he has an uphill climb to face in Nemkov before he gets to the tournament final.

Who do you think wins the Bellator Light Heavyweight Grand Prix?