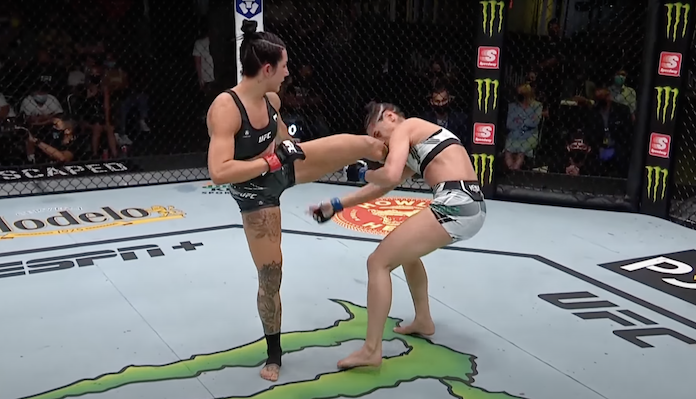 UFC women’s strawweight Cheyanne Buys is happy to win a $50,000 bonus at UFC Vegas 33 after having a bank negative account balance.

Buys knocked out fellow Dana White’s Contender Series alum Gloria de Paula with a head pick and punches in the first round of the UFC Vegas 33 co-main event. Coming off of a one-sided loss to Montserrat Ruiz in her UFC debut, Buys knew her back was against the wall and she went in there and put on an amazing performance by scoring the KO win.

Following the fight, Buys spoke to the media and revealed how important it was for her to win the 50k. “The Warrior Princess” explained how she and her husband, fellow UFC fighter JP buys, recently moved from Dallas to Las Vegas and spoke about the risks they took.

“I am negative in my account right now. So it’s gonna make a big difference. My whole paycheck is I have to pay back $15,000 for a loan I got from a few people, so I made 10 and 10 for my win and show so that $20,000 was just gone. And I’m okay with is, I was okay if I won and that check was gone because I made that move out here and I knew that this fight was just gonna be for the move. It was the best decision me and my husband made for our careers and just to get that bonus,” Buys said (h/t MMAFighting).

“I’ve been so broke my whole life because of this sport but it’s so worth it to me because I love this sport, but to get a $50,000 paycheck, my husband’s gonna tell me to put it away, I’m definitely gonna want to buy some nice stuff, but I like to buy a little bit of things for the house and for my animals. I really like to spoil my family, but this week I’m definitely taking my team to go get a nice dinner. It’s life-changing for sure, but I’ve got to put the money away and just go out there and fight again.”

What do you think is next for Cheyanne Buys following her big win at UFC Vegas 33?