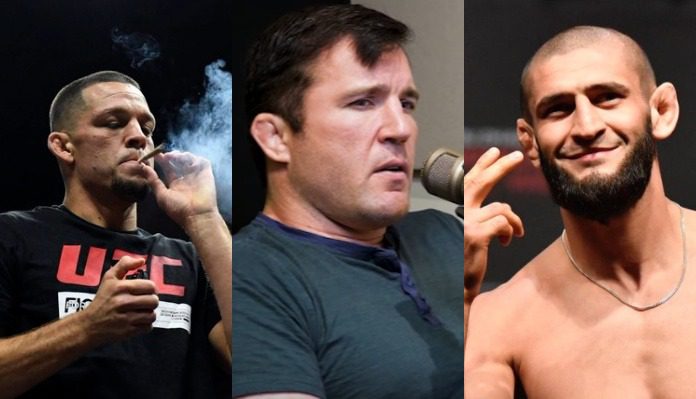 Chael Sonnen is weighing in on the UFC attempting to book Nate Diaz vs. Khamzat Chimaev.

UFC President, Dana White, recently did an interview in the ‘war room’ for ‘The Pivot Podcast’ and in the background a list of future fights were displayed on the board. Albeit the room is considered to be top-secret, a screen shot of the board has emerged on ‘Twitter’ and shows a Nate Diaz (20-13 MMA) vs Khamzat Chimaev (11-0 MMA) for UFC 276.

The board also indicates UFC 276 includes Israel Adesanya vs. Jared Cannonier in the main event for the middleweight title while the co-main event would be Diaz-Chimaev. The rest of the main card shows Sean Strickland vs. Alex Pereira, Lauren Murphy vs. Miesha Tate, and Sean O’Malley vs. Pedro Munhoz.

UFC 276 will take place on July 2, 2022, at the T-Mobile Arena in Paradise, Nevada. The date and location are known for sure, who has been confirmed by the promotion is still unknown, but now there is much speculation.

Chael Sonnen, during his ‘Bad Guy Inc.’ podcast had this to say about the possibility of a Diaz vs Chimaev fight at UFC 276:

“Adesanya vs Cannonier is a tough sell as far as being a headliner for PPV. You need to strengthen the card. Chimaev vs Diaz that works very much. That works more so now that it did 3 months ago. And you guys might remember 6 months ago when Dana said he was going to make that fight. Was it Nate or was it Nick vs Chimaev? Dana only said it once and it didn’t go anywhere. Chimaev vs Nate Diaz has a very different feel now.”

Speaking on the photo, Chael had this to say:

Do you agree with Sonnen that the lineup for UFC 276 is legit? Would you like to see Khamzat Chimaev battle it out with Nate Diaz?