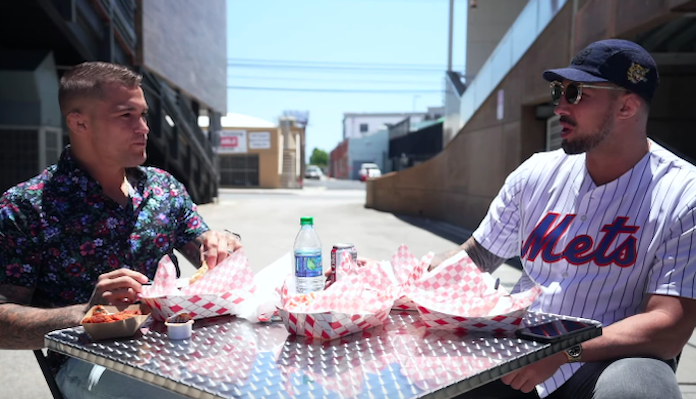 Former UFC heavyweight Brendan Schaub, who now makes his living as a podcaster, comedian and combat sports analyst, believes that the UFC is going to change quite a bit during its time on ESPN.

In fact, he believes the changes have already begun.

Schaub has previously posited that we’ll see much less of mainstream UFC superstars like Conor McGregor and Brock Lesnar now that UFC pay-per-views are available exclusively on ESPN+. With pay-per-views only available through one source, sales are likely to fall, which will limit revenue potential for fighters who have come to rely on pay-per-view points.

With fighters like Conor McGregor no longer competing as regularly due to this change, Brendan Schaub also believes we’re going to hear a lot less trash talk in the UFC.

Schaub discussed this topic with UFC interim lightweight champion Dustin Poirier, who is expected to fight Khabib Nurmagomedov this fall.

“I don’t need you and Khabib to talk shit,” Schaub told Poirier on Food Truck Diaries (transcript via Bloody Elbow). “I kind of feel now that Conor has kinda been out of the picture, the whole trash talk, that WWE entertainment phase that we were going through — I call the ‘entertainment era’ — it’s kinda over.

“Especially with ESPN,” Schaub continued. “With the new business model, and they’re going away from superstars and the pay-per-view model, there’s no reason to act like that anymore.”

Dustin Poirier, who has never been particularly big on trash talk, hopes Brendan Schaub is accurate in this assessment of the situation.

“I hope so, man,” Poirier responded.

What do you think of these comments from Dustin Poirier and Brendan Schaub?