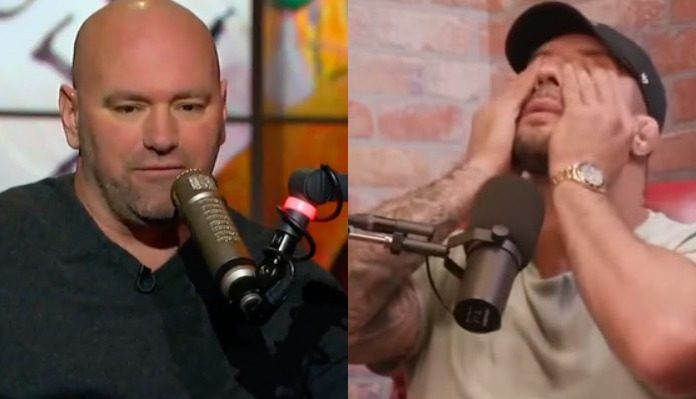 Last weekend, ‘Funk Master’ faced off against ‘No Mercy’ at UFC 273. After grueling five-rounds, Sterling won the bout against Yan via split decision. With the victory, he moved to a controversial 2-0 in his series against the former champion.

Following the bout, Dana White gave his thoughts at the UFC 273 post-fight presser. The UFC president opined that the judges got the result wrong and that Yan actually won. Now, Brendan Schaub has given his thoughts on not only the fight but on White’s comments.

The fighter-turned-comedian discussed the situation on The Schaub Show. Schaub noted that he thought Sterling clearly won the fight. He also noted that White’s comments are out of line, and will only lead to more fan hate for Aljamain Sterling.

“When you’re the presidency of the UFC, you have a responsibility. So when you say that the judges got that one wrong, now, you’ve f*cked Aljamain Sterling over. Now you’ve f*cked him. He beat the naysayers, the hater, he shut everyone up. Now it resurfaces because the most powerful man in the UFC says ‘He didn’t win that fight’. Which, you don’t know what you’re talking about. You’re wrong dude.”

Brendan Schaub continued, “You f*cked your fighter over. Now, he has to go back to the drawing board and deal with this stupid f*cking hate. Why? Because he only won three out of five rounds? You watch it from cageside on your little monitor, and you rush to judgment before watching for a second or third time. It’s your f*cking responsibility, your duty, should be when you say that stuff, you’re going based of the criteria that the fighters have to when it comes to judging. But you don’t. You came to a quick judgment, and it f*cked your fighter.”

What do you think about Brendan Schaub’s comments about Dana White?