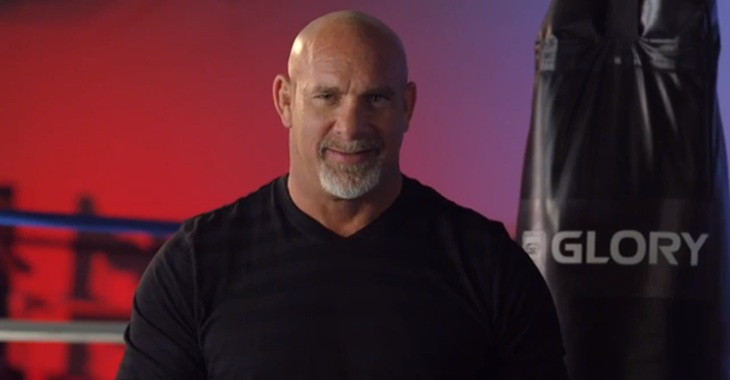 No, the wrestling legend did not give ‘Gamebred’ the famous words of “You’re next!”, but he did have some fun with the UFC standout.

It all started after Louis Gregory shared a photo on Twitter of himself sandwiched between Jorge Masvidal and Mike Brown.

‘Uncle Louie’ captioned the photo with the following message:

“This is a tough guy sandwich. I’m just the burger!! Where’s @Goldberg when I need him!!!! @GamebredFighter @UncleLouie @mikebrownmma #TitanFC56 @UFCFightPass”

Jorge Masvidal (34-13 MMA) would later respond to the post with the following message for Bill Goldberg.

.@Goldberg don’t want to get that knee. Spear don’t work on me #supernecessary https://t.co/RH2WVOCmaf

“@Goldberg don’t want to get that knee. Spear don’t work on me #supernecessary”

The WWE Hall of Famer would later respond to ‘Gamebred’ and showed the Miami native some serious props.

You are correct my friend but if I remember we are in a completely different weight class! Plus I’m in the seniors division 🤙😬 https://t.co/a3YaG0SoB1

“You are correct my friend but if I remember we are in a completely different weight class! Plus I’m in the seniors division.”

Jorge Masvidal, who scored the fastest KO in promotional history at UFC 239, would later reply to Bill Goldberg with the following show of respect.

Can’t fool me. You are in better shape than half the jabronis out there https://t.co/bGB3QHCs8p

“Can’t fool me. You are in better shape than half the jabronis out there.”

Masvidal is coming off back-to-back knockout victories over perennial welterweight contenders Ben Askren and Darren Till in his most recent Octagon appearances.

‘Gamebred’ had starched the Liverpool native at March’s event in London, before needing just 5-seconds to dismantle Ben Askren at UFC 239.

Jorge Masvidal is now being linked to a potential fight with Nate Diaz which could occur as early as UFC 244.

As for Bill Goldberg, the former WWE Champion most recently stepped foot in the ring at Summer Slam, where he defeated Dolph Ziggler.

What did you think of the recent Twitter exchange between WWE’s Bill Goldberg and the UFC’s Jorge Masvidal? Sound off in the comments section PENN Nation!