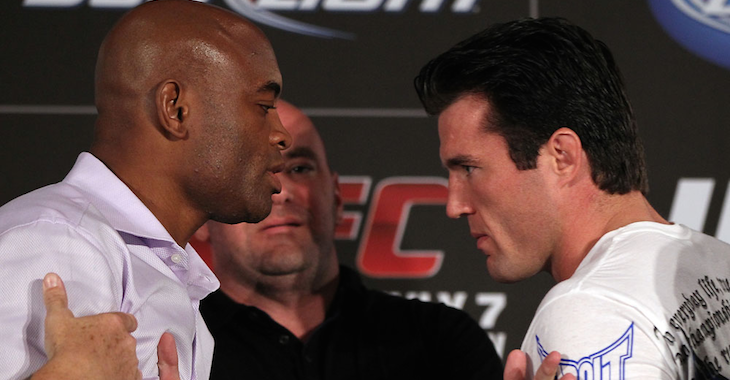 However, according to Chael Sonnen his current employer (Bellator MMA) has given him permission to step in and face Anderson Silva for a third time this evening at UFC 234.

Sonnen recently spoke with ESPN’s Ariel Helwani where he revealed that Bellator has given him permission to step in and face Anderson Silva if the UFC wants to do Kelvin Gastelum vs. Israel Adesanya.

Kelvin Gastelum was slated to challenge Robert Whittaker for the UFC’s undisputed middleweight championship at tonight’s UFC 234 event in Melbourne.

Unfortunately for fight fans, the event headliner was cancelled just hours ago after “The Reaper” was forced to pullout with an inury.

Chael Sonnen and Anderson Silva already have a storied history having competed on two occasions at UFC 117 and UFC 148.

“The Spider” emerged victorious in both of those aforementioned contests, with both wins coming by way of stoppage (submission and TKO).

The services of Chael Sonnen was not the only offer received by UFC officials this afternoon.

Former UFC lightweight title challenger Donald Cerrone, who just so happens to be in Australia, has also offered his short-notice services to the promotion for UFC 234.

With that being said, it seems highly unlikely that either Chael Sonnen or “Cowboy” Cerrone will be stepping into the octagon tonight in Melbourne.

Are you surprised that Bellator MMA would give their fighter Chael Sonnen permission to compete against Anderson Silva at UFC 234? Sound off in the comments section PENN Nation!