Anthony Smith believes Jake Paul did the Nate Diaz – Anderson Silva thing backwards: “You also have to be able to convince people that there’s an opportunity for Jake Paul to lose”

Smith has had no shortage of words for Jake Paul preceding and following his recent boxing match and win over Anderson Silva. It was Paul vs Silva last Saturday, October 29th at the Desert Diamond Arena in Glendale, Arizona. Paul took his unblemished record to 6-0, 4 of those wins via knockout.

At the post fight press conference, Paul took no time in calling out Nate Diaz and Canelo Alvarez to meet him in the ring next. 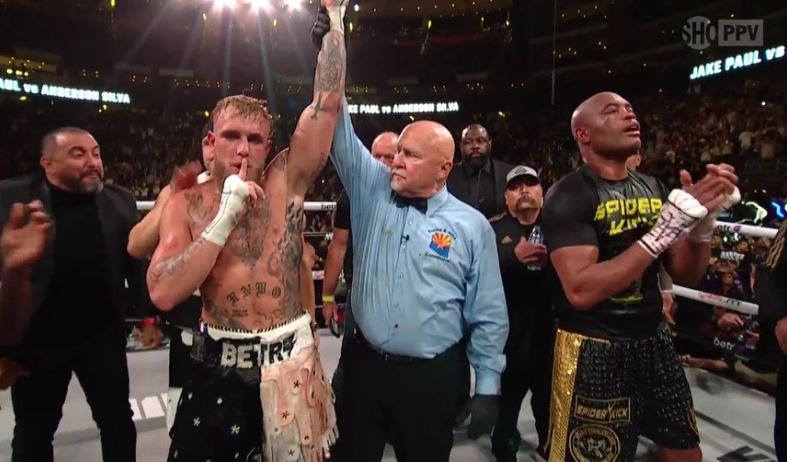 Michael Bisping sat down with Anthony Smith and discussed a Jake Paul vs Nate Diaz match-up on his ‘Believe you Me’ podcast. Bisping said:

“This is over Jake Paul, calling out Nate Diaz and Canelo Alvarez afterwards. … I don’t hate Nate Diaz. I have got nothing against Nate Diaz… But I don’t think Nate Diaz will beat Jake Paul in a boxing fight. If I am honest, He is just too small. … he was predominantly a lightweight. Size matters.”

Apparently Nate Diaz’s crew recently got into a backstage altercation with Jake Paul’s crew. Videos posted to social media indicate Diaz had to be escorted out of the arena.

“The man is pushing 40, bro. …so going around getting thrown out of arenas. You know what I mean?”

In response, Anthony Smith shared his view that ‘The Problem Child’ did it wrong saying:

“In my eyes, in order to really hype a fight makes it really juicy. But you have to convince people that there is an opportunity for Jake Paul to lose. I think he did the Anderson Silva, Nate Diaz thing backward.”

“Had he fought Nate Diaz and beat him like I think he probably will and then gone on to fight Anderson like I fought this legend?… I don’t think it will be as big as maybe Jake Paul thinks it is.”

Do you agree with Anthony Smith that Paul should have got in the ring with Diaz before fighting Silva? Do you want to see Diaz make his boxing debut against the undefeated Jake Paul?