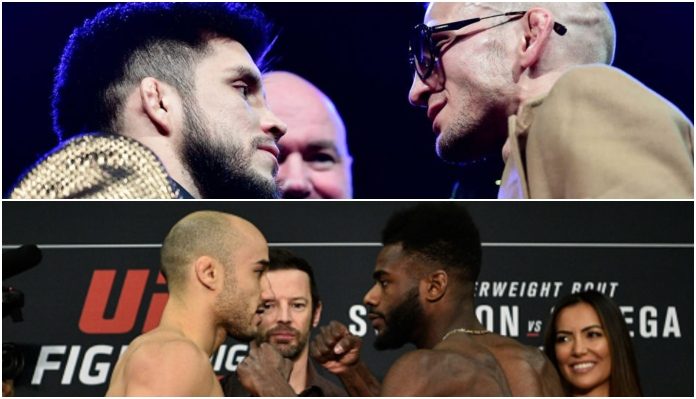 The 135-pound bantamweight division is about as deep as it gets across the board in MMA. In the UFC specifically, new and exciting talents are seemingly emerging with every event. However, the weight class is, unfortunately, starting to find itself a bit clogged at the top.

At UFC Brooklyn in January, the division’s champion, TJ Dillashaw, went down in weight to try and capture the flyweight title against the recently crowned Henry Cejudo. The defending champion would end up doing just that as he only needed 32 seconds to dispatch of the higher weight class’ titleholder.

Because of this, it creates a weird spot for the 135-pound champ as he was beaten with relative ease but has challengers aplenty waiting in line to face him. The clear next one being Brazil’s ‘Magic’ Marlon Moraes who has looked sensational as of late.

In Cejudo’s division of flyweight though, each fighter that loses is being cut with a loss thus creating a last man standing type of scenario. With Cejudo’s return to bantamweight at some point inevitable, it begs the question of whether or not that will be in his next time out to try and take Dillashaw’s title.

A fellow top 135-pound contender to Moraes, Aljamain Sterling believes he has the answer.

“Hey @HenryCejudo, I heard you got the rematch with @TJDillashaw. Could you please tell me the date so I can rematch @MMARLONMORAES on the same card for “another” number 1 contender fighter. #AskingForAFriend @ufc 🙃” Sterling tweeted.

Sterling and Moraes fought each other in December 2017 in a fight that saw Moraes score a stellar first round knockout via knee strike. It was the first and only time that the 17-3 Sterling has been finished in his 20 fight career and was his most recent loss.

Since then the Serra-Longo product has put together a very impressive three-fight winning streak with his last win coming just last month when he defeated Jimmie Rivera via clear cut unanimous decision at UFC Phoenix.