Aljamain Sterling was one of many fighters who reacted online after tonight’s UFC Vegas 21 main card opener ended due to an illegal knee.

A middleweight bout between Eryk Anders and Darren Stewart kicked off tonight’s main card action from Las Vegas. Unfortunately for both fighters, as well as fans watching from home, the bout was ended prematurely due an illegal knee.

Late in the opening round, Anders connected with a knee to the face of Stewart while he was clearly grounded. After the foul, the doctor stepped into the Octagon and ruled that ‘The Dentist’ was no longer fit to continue.

Aljamain Sterling, who recently captured the promotions bantamweight title thanks to an illegal knee from Petr Yan at UFC 259, shared his immediate thoughts on the Anders vs. Stewart fight-ending on Twitter.

A fight fan then joked that Darren Stewart should now be crowned the UFC’s new middleweight champion.

Aljamain Sterling responded to that suggestion with the following:

Unfortunately for Darren Stewart, tonight’s contest with Eryk Anders was ruled a no-contest and not a disqualification as was the case in Sterling vs. Yan.

That means no win bonus for Stewart, and no additional chalk in the loss column for Anders. 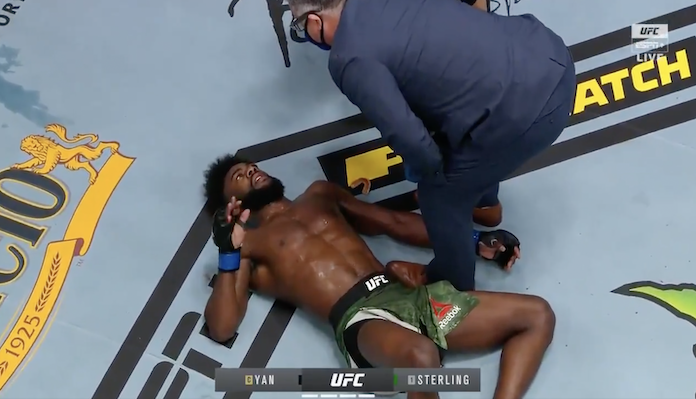 Some fight fans were not happy with the ruling, especially given the outcome in last weekend’s aforementioned UFC 259 bantamweight title fight.

UFC middleweight Kevin Holland came to the defense of those taking shots at Aljamain Sterling, sharing the following statement on Twitter.

That was nothing compared to the blast @funkmasterMMA received. #UFCVegas21

“That was nothing compared to the blast Aljamain Sterling received.” – Holland wrote.

Other fighters to weigh in on the situation included former UFC heavyweight champion Josh Barnett. ‘The Warmaster’ had the following to say:

“Superior fight rule set.” – Barnett captioned a video of knees being used under the PRIDE banner.

What do you think of the comments from newly crowned UFC bantamweight champion Aljamain Sterling? Share your thoughts in the comment section PENN Nation!