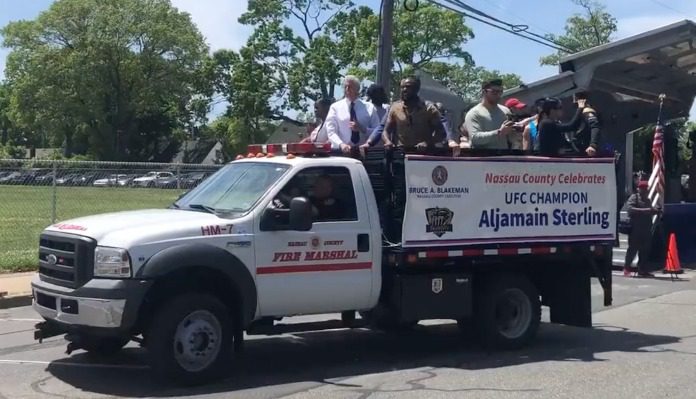 Aljamain Sterling got a parade in his honor on Monday in his hometown.

Sterling, the current UFC bantamweight champion, had a rally in his hometown of Uniondale, New York as he rode atop a fire truck and waved to everyone in attendance. Along with the parade, Nassau County declared May 23 as Aljamain Sterling Day.

The hometown arrival of a champion pic.twitter.com/OzhxupuPfm

The reception to Sterling seemed to be strong and after the parade, he spoke to the crowd where he admitted it is surreal for him.

“Never did I think walking the halls of Uniondale High School that I would be here standing in front of all you guys, the next generation of kids, the future, speaking to you guys,” Sterling said (via Newsday). “This is just, this is unreal… I’m an emotional guy. I get emotional even just being up here in front of you guys because this is like, you know. I was a small kid and to be doing this, man, truly, truly blessed. Sometimes I really do still think I’m dreaming and wonder when I’m gonna wake up. Man, I got a day. This is insane.”

Aljamain Sterling, of course, defended his bantamweight title as he edged out a split decision over Petr Yan at UFC 273 back in April. Sterling was a sizeable underdog against Yan and proved many doubters wrong and now nearly two months later he finally got to celebrate with his town. Prior to that, he won the belt by DQ as Yan threw an illegal knee which set up the rematch at UFC 273.

Since his last win over Yan, Sterling called out TJ Dillashaw but also expressed interest in facing either Jose Aldo or Henry Cejudo. When and who he will face next is uncertain, but for now, Sterling is still celebrating his title win back home on Long Island.

Who would you like to see Aljamain Sterling fight next?