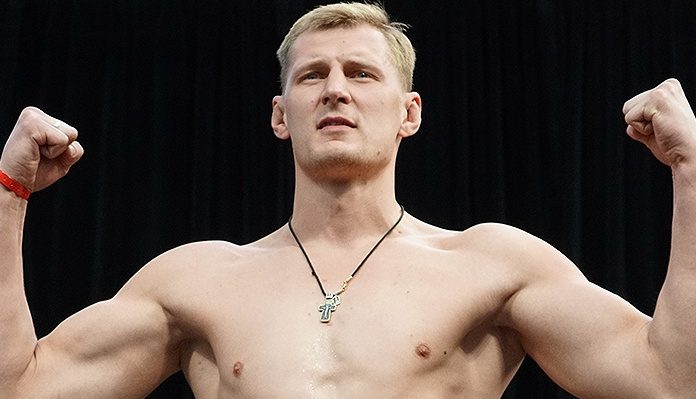 UFC heavyweight contender Alexander Volkov explained why he was starstruck being in the Octagon across from Alistair Overeem at UFC Vegas 18.

Volkov picked up the biggest win of his career when he finished Overeem with punches in the second rounds of their recent main event heavyweight bout. Volkov showed technical striking skills and a heavy hand as he systematically picked apart Overeem with his powerful punches until the referee stopped the fight. Considering how awesome of a performance he had, you’d be surprised to know that Volkov admits he was initially starstruck. For a fighter who had such a long road to the UFC, Volkov can now look back at his career and be proud of it.

Taking to his social media days after knocking out Overeem, Volkov once again praised his rival, calling it an honor to share the Octagon with him. The Russian then explained how he didn’t grow up blessed with physical talent and how working hard is what has got him to the top-five of the heavyweight division.

Alexander Volkov: “I was honored to share the octagon with @alistairovereem At that very moment I thought: “Am I really here right now, Overeem is opposite me and I will fight with him?!” 10 years ago when I just started organizing my first professional fights, I would never have believed it. I have never been physically gifted, I don’t have an outstanding talent for learning everything very quickly, and I have not been “led” by the “right” opponents during my career. My place in this sport is especially valuable to me now because it is given to me with great effort and discipline. And I believe that I can never surprise you all again, even if everything is against me!”

Even though Volkov has been there with some big names during his UFC career, such as when he knocked out former UFC heavyweight champion Fabricio Werdum in London, Overeem has the most name value. Volkov, the former Bellator heavyweight champion, is the No. 5 ranked heavyweight in the UFC now. With the win over Overeem and a win over Walt Harris in his last fight, he figures to be in play for a big fight coming up. While he sometimes might have to pinch himself, he doesn’t have to anymore. He’s officially made it.

What do you think is next for Alexander Volkov after defeating Alistair Overeem at UFC Vegas 18?