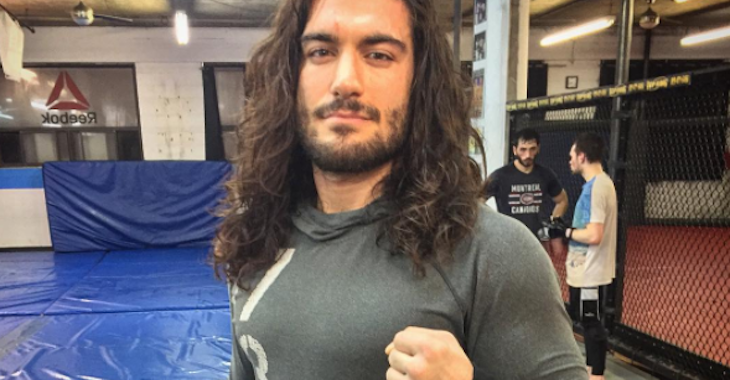 Round one begins and Theodorou immediately begins firing off leg kicks. Kelly charges forward with punches but Elias circles out and then continues to work the legs. More kicks from Elias including one to the body of Kelly. Dan charges forward with a flurry but cannot connect. Another hard leg kick from Elias. Kelly is able to find a home for a left hand. Elias goes upstairs with a kick but it is blocked by Kelly. Dan eats a body kick. He charges forward with punches and clinches Elias against the cage. Theodorou breaks free and lands an outside leg kick. Elias with two more hard low kicks. He throws a side kick to the body. Another hard kick to the body but Kelly just walks through it. Kelly with a flurry now. He charges after Elias who circles out. Theodorou with yet another solid kick to the body of Kelly. Elias misses with a follow up head kick. Dan charges in with an uppercut but Elias makes him miss. Round one comes to an end.

Round two begins and Theodorou lands a pair of jabs and then a low kick. Dan clinches up and begins working some uppercuts. Elias breaks free and lands a kick to the body. Kelly is pressuring early. Theodorou is doing his best to circles and stay at a safe range. The fighters clinch up once again. Kelly with some uppercuts. Elias lands a knee and then misses with an elbow. Kelly scores a judo trip and winds up on the back of Elias. Dan presses him against the cage but the Canadian breaks free. Elias lands a kick to the groin area of Kelly and the referee steps in to stop the contest. Dan is allowed to recover and then we restart. Elias with a nasty low kick. He goes upstairs but it is blocked by Kelly. Dan is trying to find his range. He gets Elias in the clinch and lands a big left hand. Elias with a head kick. Kelly just walks through it. This guy is a zombie. Elias hammers him with a low kick. Kelly continues to press forward. He lands an uppercut followed by a left hand over the top. They break. Elias misses with a left and gets countered nicely with a right by Kelly. Dan with another good punch. Elias pushes him up against the cage. The fighters break and Elias takes a long look at the clock. Kelly eats another head kick from Elias but it appears to do nothing. Round two comes to an end.

Round three begins and Dan Kelly charges forward with strikes. Elias catches him with a left that sends him to the floor for a second. Kelly is back up but he eats a head kick. Dan returns fire with one of his own. The fighters clinch against the cage. They break seconds later. Kelly gets a hold of Elias and takes his back. He locks in a rear-naked choke. It looks tight. Elias is able to scramble and winds up on top. He presses Kelly against the cage. Dan “wall-walks” and gets back up. The fighters are battling hard in the clinch. Knees from Elias. Kelly breaks free. Theodorou with a front kick to the body of Kelly. Dan walks him down but eats a pair of leg kicks for his troubles. Kelly with a right hand that misses. He is trying to setup his left. He lands a jab followed by a low kick. Theodorou circles off of the fence. Elias with another head kick. Kelly just eats those like they are cookies. Another big kick from Elias. Kelly needs something here. He lands a left over the top. Elias goes back to the body with a kick. The horn sounds to end round three.